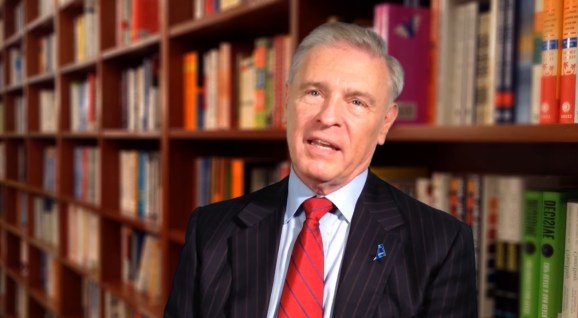 A still shot from the AMA YouTube video "Joel Peterson, Chairman of JetBlue Airways, Talks about the ’10 Laws of Trust’"

Mr. Rogers is having a “moment,” with the “Won’t You Be My Neighbor” documentary doing big box office and a full-on Hollywood biopic starring Tom Hanks going into production this fall. It’s causing many observers to say that the nostalgia for Fred Rogers is the result of a national longing for his kind of character and values in this era of incessant conflict.

But not just in politics. As a serial entrepreneur and CEO and having just come off an astonishingly cutthroat tech company board of directors experience, I’d observe that the Mr. Rogers high-empathy, high-integrity, gently kind leadership style is in short supply in the Valley, too. The recent Tesla and Facebook sagas feel like Exhibit A and B here, but we’d run out of letters before we ran out of examples of bad behavior from tech CEOs and investors.

On the other hand, Mr. Rogers is being lauded as a highly talented, extraordinarily dedicated, and selfless man of ideas. And if you’re thinking, “No way that kind of no-guile, no-hustle approach would fly in the harsh world of the tech universe,” I’ve got a man you need to meet, because I’m pretty sure that Joel Peterson is the Mr. Rogers of Silicon Valley.

Peterson isn’t a household name, though he’s affiliated with a whole lot of them. He’s a faculty member at Stanford’s Graduate School of Business and also Chairman of the Board of JetBlue Airlines  and of the governing board of Stanford’s Hoover Institute, the famous public policy think tank. He’s got tech cred too, having been Bonobos’ first seed investor, and also seeding the company that grew into smartphone handset support giant Asurion, as well as several other tech companies.

Thirty years ago, at age 42, he was named CEO of the Trammell Crow Company, the largest private commercial real estate developer in the world at the time. Eventually he left to found Peterson Partners, a private equity fund that now manages almost a billion dollars in investor capital. And in 2016 he published  The Ten Laws of Trust: Building the Bonds that Make a Business Great, exploring how what Peterson calls “the ultimate business currency” is created, destroyed, and employed.

Now — disclaimer: For the past 16 years, he’s also been a mentor, investor, friend, and occasional customer of mine. So I know him pretty darn well – and yeah, I’m biased. But the Rogers-Peterson analogy first came to me this past spring while I was sitting in the audience as Peterson delivered his annual “Last Lecture” at Stanford. It’s a wildly popular tradition at the Graduate School of Business where students choose six beloved faculty members to deliver a last full dose of life and career advice to them during their final week of classes before graduation.

Watching him get ready to start his talk that day, my first reaction was that Peterson was a fish out of water. Stanford can rightly be considered Ground Zero of the Valley, kind of the tech industry’s womb. It’s the place from which the entire hyper-casual, often cynical, goofily-dressed tech/VC culture emanates.

And on that early June day, seeing a guy who actually bears a vague physical resemblance to Mr. Rogers surrounded by the school’s flip-flopped and tank-topped second-year hotshots felt like an odd mismatch.

But in that mecca of soon-to-be-masters-of-the-universe, I watched 300 young post-Millennials listen in rapt attention while this diminutive, shirt-and-tied, soft-spoken figure delivered a 66-slide, hour-long, deeply thoughtful presentation about how to build a fundamentally meaningful career and life. It roamed from deep biography of Peterson himself to McKinsey-style up-and-to-the-right matrices of life priorities and choices. It didn’t contain one slide about tech trends, seed round structures, or how to recruit and partner with the engineering grad students across the street.

What Peterson’s Last Lecture did do was deliver a core set of ideas that, save for the elevation and sophistication of its language and the rarefied air of some of its illustrative anecdotes, sounded to me like the thematic backbeat for a Mr. Rogers episode: You’re in charge of yourself, and you get to decide who you want to be. Other people matter a lot, so take time to care for and be kind to them. Work hard at something that’s meaningful to you. Tell the truth. And bear in mind that your reputation follows you everywhere, for better or worse.

All very Rogers-ian in their simplicity and soft power, and all delivered with the same “hi-neighbor” sincerity.

The Stanford crowd not only lapped it up – they badgered him for almost a half hour afterwards with their questions and requests for further details. So as the Mr. Rogers media wave rose earlier this summer, it got me thinking again about the parallels between the two men.

I picked up the phone and called Peterson to ask him if he had ever noticed the similarities.

“Well I’m flattered. That’s an interesting comparison,” he said. “Mr. Rogers worked to build trust with the kids and parents who watched him, and I think maybe I’ve been good at building trust at companies where I’ve worked and with students I’ve taught here. The common factor would be that cultures based on trust tend to deliver great results.”

Though he’s no technology wizard, Peterson’s track record as an investor is strong. Asurion founder Kevin Taweel said Peterson was one of his very earliest investors. “He’s a rock star,” Taweel said, “but he’s so approachable. The magic of Joel is – he’s all that.”

Taweel saw the Mr. Rogers comparison through the lens of an interesting hiring insight Peterson had given him. “He was talking about what kind of talent he always looked for when evaluating entrepreneurs, and he went right to likeability. Founders have to ingratiate themselves with a lot of different people – investors, employees, customers – and people want to interact and work with someone they like. It really ties to the way Mr. Rogers always pushed kindness. It’s such a profound, overlooked truth.”

I asked Charles O’Reilly, one of Peterson’s more academically-oriented Stanford faculty colleagues, how an Iowa-born, mild-mannered, devout Mormon managed to resonate so profoundly with these Generation Z superstars.

O’Reilly, who teaches organizational behavior and has studied the effects of narcissism in the CEO suite, said “We’re here in the Valley, which is a place that’s just filled with narcissists running things. The entrepreneurs here can be grandiose — they expect they’re going to change the world — and some of them can be impulsive and manipulative, and a lot of them have low social empathy.”

“And VCs love these types of people, because if you’re investing, if you have a choice between two companies where one is run by the very intelligent, brash, self-promoting, if-you-don’t-understand-you’re-an-idiot entrepreneur and the other is run by a quiet, introverted engineer, who are you going to fund? Most of the time it’s the first.”

“But in a world where our students are exposed to so many of these narcissists, I think Joel just really stands out as an alternative model of what gets held up around here. He’s manifestly successful in business, but he’s done it in a way that’s very different from what they see in much of the Valley, and they’re perceptive enough to recognize that.”

Not unlike the stark contrasts between Mr. Rogers and other sorts of kids’ TV stars, who seem to spend more time in rehab or county jail than they do actually helping kids.

It’s not just the Stanford community that sees the parallels. Arianna Huffington, who met Peterson when he invited her to be a guest lecturer for his classes, said “The analogy of Joel and Mr. Rogers absolutely rings true. But it’s not just about speaking styles or that Joel is calm and kind and level-headed. What was special about Mr. Rogers was his emotional intelligence, which is true about Joel, as well.”

“And that’s also why it’s so great that Joel is teaching and connecting to students in Silicon Valley, who will one day be running tech companies and starting their own. (He has) a radical humanity that is exactly what those building the next generation of technology need to help them remember that there are real people on the other side of that technology.”

Mitt Romney, a friend of Peterson’s since their BYU college days, said Peterson has always had “a steadfast commitment to integrity, respect, and humility. …He’s a role model not only to his peers but also to a future generation of business leaders.” Superstar venture capitalist and Netscape founder Marc Andreesen pointed to Peterson’s “calm, thoughtful advice” as the key to the trust those who know him place in him.

Peterson told me that what drives trust – and often, therefore, success — in business are the same bedrock qualities Fred Rogers made it his mission to instill in kids.

“It’s all about principles like kindness … caring deeply about what you’re doing … having high personal character. It’s stuff you learned at your mother’s knee. And I’m not talking about doing things from the vantage point of altruism, either. I like to say that all negotiations are serial, not episodic, by which I mean that almost nothing meaningful in life is one-and-done. Somewhere down the line you’ll run into yourself over and over again.”

“If you’re treating any constituency – customers, employees, people across the table from you in a transaction, anyone – badly, you’ll run into yourself and your reputation in an ugly form later on. Guaranteed.”

Maybe we’ll never have a Mr. Rogers-style resident in the Oval Office, but there’s already one in the Valley — and tech’s gathering political and economic maelstrom suggests it might be time to adopt a few more of Peterson’s values for the Neighborhood.