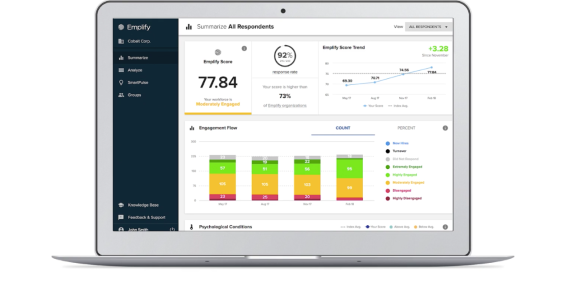 Emplify, a two-year-old software startup that helps companies track employee satisfaction, today announced that it has raised a $7.5 million round of financing.

The round was led by New Jersey-based growth equity investment firm Edison Partners, with participation from a pair of Midwestern VC firms — Indiana’s Allos Ventures and Missouri’s Cultivation Capita. Headquartered in Indianapolis, Emplify had previously raised a $3 million seed round.

Traditionally, companies have measured employee engagement in one of two ways — either they take on a do-it-yourself mentality and send out a questionnaire via Survey Monkey or a similar platform every year or they hire a pricey consulting firm to do the work.

Emplify aims for the middle ground — its software allows companies to survey their employees quarterly, but it also assigns customers an “employee engagement specialist” who regularly checks in and makes suggestions about where to improve.

Companies that use Emplify start by sending their employees a six-minute survey they can fill out by email, SMS, or in Emplify’s app. The survey asks employees questions such as how well they understand their role within the company and how often they receive feedback. Emplify then generates an overall “employee engagement” score.

Companies are also able to segment data by department, location, tenure, gender, and ethnicity, among other factors. Each quarter, businesses can use Emplify’s software to solicit employee suggestions in areas they’d like to improve, work with their assigned coach to come up with a plan of action, and then track how much of a difference those changes made in terms of improving employee satisfaction in that area.

In a phone interview with VentureBeat, Emplify CEO and cofounder Santiago Jaramillo pointed to a few trends he believes highlight the need for software like Emplify that can track employee happiness over time — a tighter U.S. labor market, a greater tendency among younger employees to change jobs more frequently, and the rise of distributed teams, which limits the amount of in-person feedback companies can get from their employees.

“What we’ve realized is that company leaders out there don’t have data or strategy for the thing that matters most, which is people and culture,” Jaramillo said. “They literally find out why people are leaving at the exit interview — which is way too late.”

Given that many companies don’t allocate a lot of resources to employee surveys, Emplify faces an uphill battle in not just getting companies to sign up for its software but also in encouraging them to regularly make time to track their workers’ satisfaction. Currently, Emplify has more than 200 customers, including motorcycle company Harley Davidson and B2B company Terminus. Jaramillo said Emplify’s typical customer pays anywhere from $10,000 to more than $100,000.

With this new round of funding, Emplify is also announcing the rollout of a new partner program with select talent management and consulting firms, which will get access to some of Emplify’s customer data.