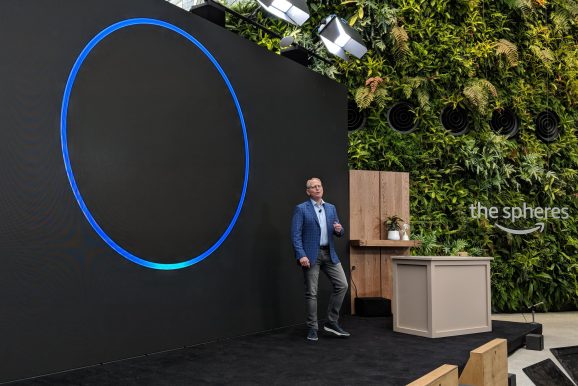 In a presentation atop its biodome in Seattle today, Amazon debuted nearly a dozen new products, ranging from next generation versions of popular speakers like the Echo Show and Echo Dot to a microwave, smart plug, and Echo subwoofer, to Echo Auto for cars.

Alongside all that, a whole lot of new features were introduced — both for consumers and developers creating experiences for Echo-enabled devices.

Here’s a quick rundown of features you might have missed.

You will soon be able to ask Alexa to follow an artist to get notifications when they drop a new album or single.

Among all the device news it’s understandable if you missed this new feature, but this may very well be my favorite software update of the day. As simple as it is, telling people when the new album drops is exciting, and since playing music continues to be the most popular way to use a voice-enabled smart speaker, it’s an example of the kind of proactive notification people won’t mind receiving.

In April, Amazon introduced Echo Dot for Kids and the FreeTime service for parents to configure a speaker for their children. Today routines — customizable commands to carry out multiple actions with a single utterance — were also introduced for kids, so parents can select music, timers, personalized messages, and other actions for bedtime or routines before or after school.

Routines for kids follows the introduction last month of new skills for kids and the Alexa Gadgets Toolkit for companies to incorporate Alexa into their toys.

Alexa Guard harnesses the listening power of Echo speakers to alert people when the sound of breaking glass or smoke or carbon monoxide alarms are heard. Alexa Guard is also able to connect with existing home security systems from Ring and ADT in order to send alerts to them too.

Today Amazon introduced partnerships with companies like Hulu and NBC as well as the Fire TV Recast, its first dedicated digital video recording device that plays television through antennas around the home.

The new services mean you can now say “Alexa, tune to ESPN on Hulu” or “Alexa, show me my recordings” to see the items you have recorded on your Fire TV Recast.

Recast can also go mobile with apps for Fire tablets or iOS or Android smartphones.

Both services are a big improvement on the first-generation Echo Show’s video abilities, which were limited to things like Twitch and Food Network videos, undercut still more when, a month after launch, Google rescinded support for YouTube.

New video options will be necessary for Amazon to capably compete with Google, which has outsold Amazon in global smart speaker sales worldwide for the past two quarters, according to Canalys numbers.

APL is a JSON-based language and include text, audio, video, and HTML 5. The APL is available today in preview.

You will soon be able to answer your doorbell and have two-way communications with people at your front door using the Alexa Doorbell API.

The Doorbell API will be part of the Smart Home Camera API and will be made available for manufacturers later this year.

The new Hub, Link and Link Plus were introduced today to enhance people’s listening experience with an Echo speaker, but with an upgrade to multiroom music support, now speakers with Alexa inside, such as those from third-party manufacturers like the Polk Command Bar and Harman Kardon Alert, can also respond when you ask Alexa to play music in a specific room or as part of a group.

Alexa is becoming a better conversationalist

Multistep requests are coming soon so Alexa will understand when you say “Alexa, add nacho cheese, tortilla chips, and chili to my shopping list” or “Alexa, play Pandora at volume 8.”

Routines will also be able to do more, with location-based triggers so as you pull into your driveway, the lights come on and your podcast starts to play.

Smarter routines were introduced just a week after Siri Shortcuts made their debut for iOS 12.

Alexa will also soon be able to tell you about activity in your email, so you can say “Alexa, do I have emails from Karen?”

This is also a pretty cool way Alexa is getting smarter. With Hunches, Alexa will begin to tell people information based on what it knows from connected sensors or devices in your home. For example, if you say “Alexa, good night,” in response Alexa might say “By the way, your living room light is on. Do you want me to turn it off?”

Sometime earlier this year, Alexa started to roll out Briefs, a way to hear a simple affirmative sound instead of more talking. Alexa is getting better about being conversational with features like follow-up, but being smart about when to speak up is key to a better experience. Hunches seems to be going down the right path.

Coming soon: Alexa will be able to tell when you’re whispering, and will in turn whisper back. That’s awfully helpful in those moments when you’re trying to speak to your intelligent assistant but your kid or spouse is asleep nearby.

Amazon and Alexa skills developers have been able to make the AI assistant whisper for some time now with SSML tags, but Amazon VP of device and services David Limp said the new feature is powered by deep neural nets to understand when a person is whispering.

This builds upon the partnership between Microsoft and Amazon, which brought Alexa to Windows 10 PCs and Cortana to Echo speakers last month. Skype has been downloaded more than a billion times, and last year Microsoft reported the service had more than 300 million monthly active users. That’s a big improvement on the DropIn feature in the Alexa app that started from zero in the first-generation Echo Show. Pretty simple math: When more people have the software for video calls, it just makes it that much more likely that people will actually utilize the service.