Amber waves of grain, indeed. Roughly 2 million farms dot the continental U.S., and the decisions their proprietors make impact the entire food supply chain. According to one study, if just 5 percent of the U.S. broccoli production isn’t harvested, over 90 million pounds of broccoli go uneaten.

“Farming has always been a complex undertaking that requires growers to manage an interconnected web of pre-season and in-season decisions while at the mercy of mother nature,” the Armonk company wrote in a press release. “With the explosion of data from farm equipment, environmental sensors, and remote input, it’s impractical to rely on intuition or traditional technology to understand what drives variation in yield or provide guidance to growers. [We’re] filling this gap by applying Watson AI to the data to generate the decision support growers need to make confident, evidence-based decisions.” 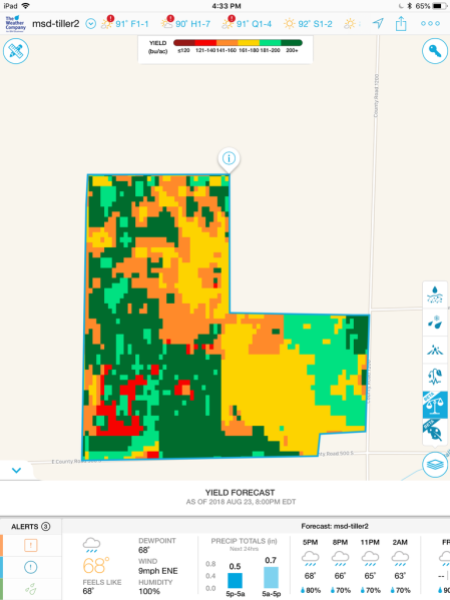 Above: A satellite view of a crop.

Leveraging the power of IBM’s predictive backend, the Watson Decision Platform for Agriculture highlights any key factors that might affect crop yields, such as soil temperature, moisture levels, crop stress, pests, and diseases. Growers can deploy drones that beam photos to the IBM Cloud for AI-informed trends analysis (to spot signs of crop disease, for instance), or feed up-close photos of plants into disease-detecting computer vision algorithms.

Large agricultural operations can tap the platform to predict when harvests are likely to happen and how much they’ll fetch on the global market. And by collating the data coming in, they can identify not only the best irrigation, planting, fertilization, and worker safety practices, but the ideal time of the year to sell a given crop.

The innovations couldn’t come soon enough. The United Nations estimates that to feed the Earth’s exploding population, food production will need to increase 50 percent by the middle of the century. With any luck, artificial intelligence will give the industry the boost it needs.

IBM says it has deployed Watson AI solutions in “thousands of engagements” with clients across 20 industries and 80 countries. It counts Deluxe Corporation, BuzzFeed, H&R Block, Ingersoll Rand, Subway, seven of the 10 largest automotive companies, and eight of the 10 largest oil and gas companies among its customers.