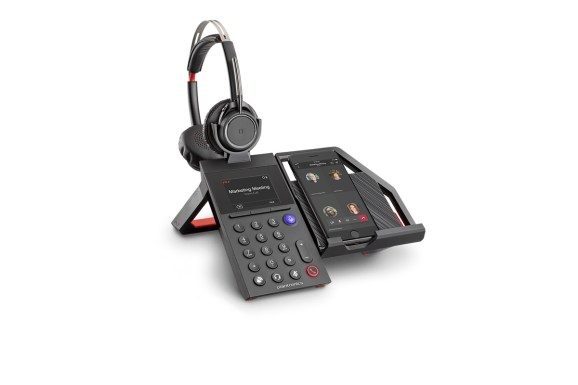 Desk phones are a staple of office cubicles everywhere. But with as many as a third of employees relying on mobile devices for day-to-day communications, it seems their days are numbered.

In anticipation of that shift, Plantronics today launched the Elara 60 Series, a “mobile phone station” that enhances smartphones with desk phone capabilities — including native support for Microsoft Teams, Microsoft’s chat and online meetings platform. It’ll ship in early 2019 for an undisclosed price.

Docks that convert smartphones into desk phones aren’t a new idea, but Plantronics said its Manager Pro software-as-a-service sets the Elara apart from the crowd. Elara 60 Series devices don’t require provisioning in some configurations, and thanks to the Elara’s embedded software and handy companion app, deploying firmware updates to them through the cloud is as easy as a button press.

The Plantronics Elara 60 Series station connects to phones via Bluetooth and supports headsets and speakerphones, plus wireless Qi charging via two coils embedded in the stand. Also on tap are the standard array of Plantronics Elara features, including Microsoft Cortana voice integration, a color LCD screen that displays charging status and Microsoft Teams notifications (in addition to connected devices, call status, and album artwork from playing songs, recordings, or podcasts), and a Kensington lock capability.

“Microsoft is thrilled to welcome the Plantronics Elara as a new Microsoft Teams device category for mobile-centric workers. With Elara, Plantronics is delivering a simplified collaboration capability which allows mobile users to simply and easily use Teams,” Ilya Bukshteyn, partner director of devices for Microsoft Teams, said.

The news was timed to coincide with the Microsoft Ignite conference in Orlando, Florida this week; Plantronics took the opportunity to announce that Teams support will be available on the forthcoming Savi and Voyager headsets (which will launch in October). Teams is already supported on its Polycom Trio conference phones, Polycom MSR (Polycom’s Skype Room System), and interoperability cloud service RealConnect.

Polycom, which Plantronics acquired in March for $2 billion, debuted RealConnect in June during Microsoft Inspire. By leveraging standards-based endpoints like Polycom and Cisco, it allows users to join and share content in Microsoft Teams meetings “seamlessly,” the company said.