Arm Holdings, the Softbank-owned British semiconductor and software company, is perhaps best known for its role in designing billions of smartphone, tablet, and smartwatch chips sold worldwide. System-on-chips built on Arm architectures have an estimated 90-95 percent share of the smartphone processing market, and Mali, Arm’s graphics processing unit (GPU), is the third most popular in mobile devices. (Arm says that to date, its roughly 1,590 licensees have shipped more than 125 billion Arm-based chips globally, with 21 billion in the fiscal year 2017 alone.)

Arm’s automotive efforts tend to get less attention. But it has licensed car hardware in some form or another since 1996 and says that the top 15 automotive chip makers tap its IP to drive 85 percent and 65 percent of in-vehicle infotainment (IVI) and advanced driver-assistance features (like adaptive cruise control and collision avoidance), respectively.

Today, in a bid to further cement its in-car dominance, the company unveiled a refreshed solutions lineup aimed at autonomous technologies.

“Key electronic innovations are going to happen in the IVI cockpit and ADAS space,” Lakshmi Mandyam, vice president of Arm’s automotive division, told VentureBeat in a phone interview. “Safety is the highest priority for car makers we talk with, for both the obvious technology factors associated with autonomous systems controlling all aspects of driving, but also to ensure that human passengers can trust their automated driver. If consumers don’t trust the autonomous systems in their cars are safe, then mass market acceptance of this technology will be slow to happen.”

To that end, Arm’s three new products and services — Arm Safety Ready, Cortex-A76AE, and Split-Lock — emphasize safety above all else. 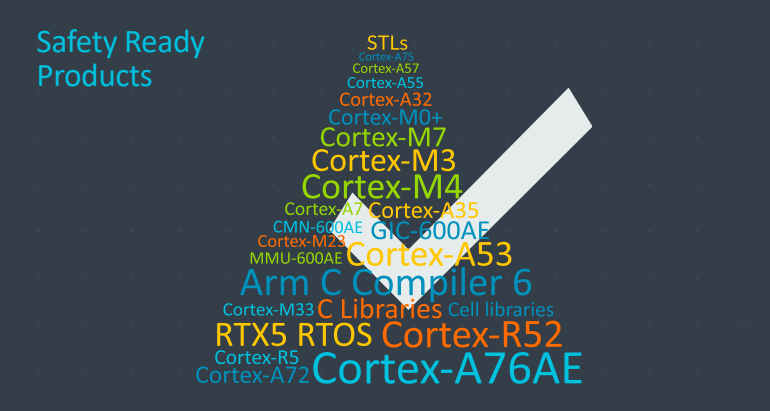 Arm Safety Ready has Arm engineers conduct a litany of tests to ensure its chipsets meet rigorous standards, such as ISO 26262 (titled “Road vehicles — Functional Safety”), the International Organization for Standardization’s (ISO) baseline for in-car electronic systems safety, and IEC 61508, the safety systems design and deployment standard published by the Electrotechnical Commission. But it’s more than just a certifications program — Mandyam described it as a “one-stop shop” for software, tools, and components intended to reduce the cost of integrating functional safety for OEMs.

“The question we asked ourselves was, ‘How do we give our partners a head start on safety?'” she said. “We’ve developed certified software components, a software test library, compilers, methodologies, [and] comprehensive safety documentation … and we’re working with third-party certification authorities to pre-certify products.”

Safety Ready products include the Cortex-A72, Cortex-R5, Cortex-R52, Cortex A53, and Cortex M4, among others

Also on the list is the Cortex-A76AE, which Arm’s calling the world’s first “autonomous-class processor.” (The “AE” in Cortex-A76AE stands for “Automotive Enhanced,” a new designator reserved for chips with specific in-vehicle processing features.) The 7nm, sub-30-watt system-on-chip targets ASIL D, the highest degree of autonomous hazard as defined by ISO, and boasts more than 250 KDMIPs of computing power. 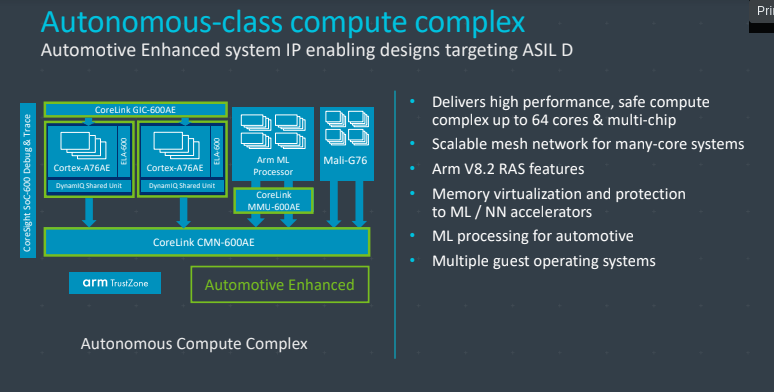 Above: The Cortex-A76AE’s Autonomous Compute Complex.

At the core of Cortex-A76AE is the Autonomous Compute Complex, a scalable architecture made up of Cortex-A76AE processors, a dedicated machine learning processor (Arm ML), and Arm’s Mali-G76 GPU meshed together with CoreLink CMN-600AE, MMU-600AE, and GIC-600AE interlinks. It supports multi-CPU clusters of up to 64 cores, with V8.2 RAS features plus memory virtualization and protection for machine learning and neural network accelerators, automotive-focused AI processing, and multiple guest operating systems.

In these ways, Mandyam said, the Cortex-A76AE is uniquely tailored to handle the vast amounts of data generated by lidar sensors, cameras, AV and storage controllers, network gateways, and other autonomous car mainstays — not to mention the software routines in operating systems from Baidu, Linaro, AutoWare, and other ecosystem partners.

“It gives OEMs the flexibility to virtualize on a single CPU and still take advantage of the Split-Lock feature,” Mandyam explained. “Our implementation allows OEMs to allocate split clusters based on the applications they have.”

The Cortex-A76AE’s other headliner is support for Split-Lock, a feature that allows OEMs to configure CPU clusters in a system-on-chip in two modes: “split mode” for high performance, which leverages two or four CPUs in said cluster, or “lock mode,” which synchronizes one or two CPU pairs for safer, less error-prone processing. 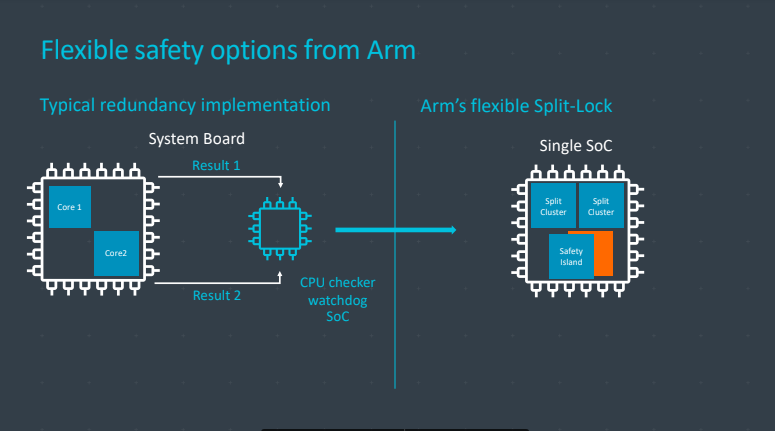 “With the processor or cores locked together, you can achieve higher levels of safety,” Mandyam said. “Each operation is checked automatically in hardware. [That’s faster than] the traditional setup, where operations are sent to another chip to check if an error has occurred. The [Cortex-A76AE] is the first processor of this performance level to incorporate Split-Lock, [and] it’s been a game-changer in our conversations with OEMs and tier-one manufacturers.”

Arm claims that in 16-core deployments, Cortex-A76AE can lead to a 10 times reduction in cost and power consumption compared to competing architectures. It’ll begin shipping in vehicles beginning in 2020, and it’s just the start — Arm’s new AE roadmap includes Helios-AE and Hercules-AE, which the company says it’ll detail at a later date.

“Historically, chip manufacturers have had to make design choices that made it more complex for them to implement safety features,” Mandyam said. “We’re introducing a high-performance processor with a best-in-class performance that’s uncompromising.”