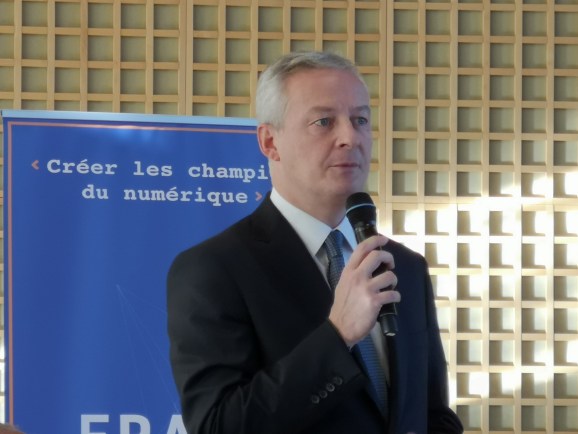 Bruno Le Maire, France's minister of the economy and finance.

Speaking at a gathering of digital leaders in Paris this week, France’s economic minister called on fellow European Union nations to rally behind a proposal to levy a tax on tech giants.

Bruno Le Maire, France’s Minister of the Economy and Finance, scolded other member European Union states for their indecision over a proposal to levy a 3 percent tax on the revenue of tech giants Google, Amazon, Facebook, and Apple (commonly referred to in Europe as “GAFA”).

“The lack of willingness and courage in countries still trying to decide is going to feed a wave of populism across Europe,” Le Maire said. “Now is the time to decide.”

Le Maire made his remarks at a breakfast organized Tuesday by France Digitale, an association that represents entrepreneurs and venture capitalists in the country.

France proposed the so-called GAFA tax to the European Union last spring. While France and other EU nations are trying to catalyze their own startup ecosystems and encourage international investments from tech companies, they are also frustrated that many of these tech giants have used various schemes to lower their tax payments.

Le Maire argues that rather than penalizing the tech companies, the new tax would be a way to level the playing field.

“We need the tax on GAFA so that we have the same rate of tax for all companies across Europe,” he said.

Still, there is some a concern that the tax may appear protectionist and dissuade investment in the region. France is calling for an EU decision before the end of the year, but it’s been having trouble finding equally vocal supporters.

By the same measure, there is growing concern that the power of the U.S. tech giants — as well as China’s aggressive investments in areas such as artificial intelligence, self-driving vehicles, drones, and quantum computing — are going to leave Europe at the mercy of foreign tech companies if the region does not accelerate and increase its own investments, Le Maire said.

France is already developing plans to pump billions of dollars into research and startups in areas such as artificial intelligence and deep tech to give its own efforts a massive shot of financial adrenaline.

“There is the question of whether we want to remain a sovereign country from a technology point of view,” Le Maire said. “Or do we want to be content to use technology from companies in the U.S. and China?”