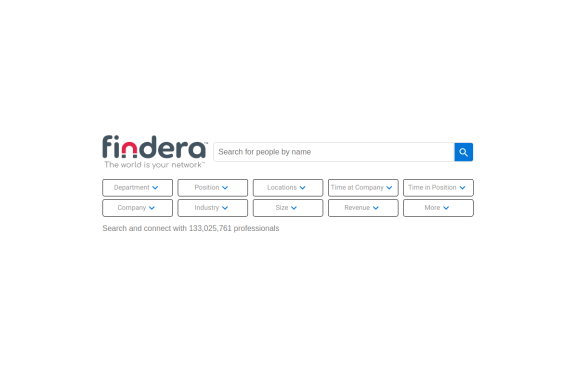 Ever meet someone at a party whose name you can’t remember? LinkedIn or Facebook can lend a helping hand, but they’re not exactly tailor-made for such searches — at least, not unless you’ve got a few details to go on.

“The ‘fabric of work’ is changing. Work relationships are more fluid, decentralized, and autonomous. Professionals need an efficient way to develop their most important professional relationships,” said Christophe Daligault, Findera COO and cofounder. “A free search engine provides a fresh alternative to time-consuming social networks and costly specialized services. Findera empowers all business professionals, including recruiters, business owners, consultants, business development, and sales professionals, regardless of the size of their company and their budgets.”

Above: Search results in Findera.

Findera taps in-house graph search technology to learn the relationships between people and companies, Daligault explained, spread across 133 million people, 60 million profiles, 12 billion data points, and 4 million businesses. The bulk of the listings data comes from public sources on the web and user contributions, plus a few proprietary databases to which Findera has exclusive access.

The user interface is a bit barebones at the moment, but it currently lets you filter people by employer and industry. That’s just the tip of the iceberg, however: You can drill down by department, position, and the amount of time they’ve spent in said department and position, or even company size, last funding amount range, and last funding round date.

Searching a name pulls up a list of candidates and their current places of work; queries take just a few milliseconds. Each result has an associated profile containing the person’s work history, an email address scraped from public records, and an export tool that lets you add as many names as you’d like to a contact list.

You won’t necessarily see the same results each time. Thanks to a bit of algorithmic cleverness on the backend, Findera learns over time what you might be looking for and tunes the relevancy of results.

Above: A profile in Findera.

I tested it by searching for myself, naturally. Sure enough, it named VentureBeat as my current employer, and it got my previous publications more or less right (albeit not perfectly). I tried a colleague’s name next, which was less successful — it listed a former employer as his current one.

Daligault chalked that up to an outdated database. The platform’s technically capable of refreshing entries every six hours, but it currently updates several times a week.

“The question we asked ourselves was, ‘How can we collect the most relevant and accurate information?'” said Daligault. “We think we’ve found the answer.”

I asked Daligault about privacy. He said Findera’s fully compliant with California’s Consumer Privacy Act of 2018, which affords California residents the right to be informed about what kinds of personal data companies like Findera have collected about them, and said that it’ll remove and unpublish profiles by request.

Findera won’t charge for service anytime soon — Daligault was adamant it’d remain free to use — but it’ll soon offer paid advertising slots, and it might impose some usage limits.

“It’s kind of ridiculous that you can order any product that exists and order a car on demand, but when it comes to connecting with people, it’s still incredibly challenging,” Daligault said.

According to Crunchbase, Findera has raised $7.9 million since its founding in 2017. It’s based in San Francisco.