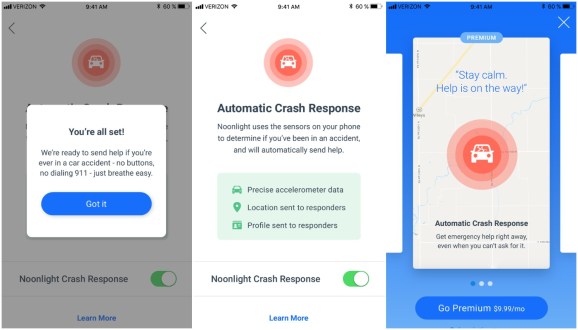 Of this there can be no doubt: Driving is dangerous. Every year, more than 1.25 million people are killed in automobile accidents on public roads, with as many as 50 million more suffering nonfatal injuries or incurring a disability.  And in the U.S., car crashes are the leading cause of death.

Automatic Crash Response, a new feature of the Noonlight app for mobile devices (Android and iOS), leverages algorithms and phone sensor data (from the GPS, accelerometer, and gyroscope) to monitor for signs of a crash, such as a sudden change in speed. When a potential crash is detected, the app automatically sends Noonlight profile data — including medical information — and location information to first responders, who check in via text and phone call. A four-digit PIN cancels the request, but Automatic Crash Response can be configured to trigger automatically even when the app is closed.

Noonlight isn’t just targeting drivers who have suffered an accident. In October, it plans to roll out Driver Score, a feature that will compile speeding, hard braking, rapid acceleration, swerving, and other bad driving behaviors in an in-depth trip summary.

Both features are a part of Noonlight Premium, Noonlight’s $9.99-per-month subscription service. Among the highlights are support for Amazon Alexa, Google Home, and Android Wear devices; IFTTT and Nest Protect integration; a silent alarm feature that can be activated from a phone’s home screen; and access to a 24/7 support staff.

Noonlight claims to have handled more than 75,000 emergencies across its pool of one million users since 2013, when it debuted at the University of Missouri-Columbia. It offers select users free access courtesy of partnerships with St. Louis MetroLink, Washington University in St. Louis, and other institutions.

With Automatic Crash Response, Noonlight joins a growing list of car crash-detecting apps that includes Sfara, SOSmart, and BlinkApp. Early September saw the launch of Uber’s Ride Check, which similarly uses GPS, accelerometer, and gyroscope data to detect when a vehicle has been involved in a crash and automatically prompt riders to dial 9/11. And last week, Medford, Massachussets-based “driving solutions” company Agero debuted Driver360, which taps artificial intelligence and smartphone sensors to detect crashes with 88 to 95 percent accuracy.