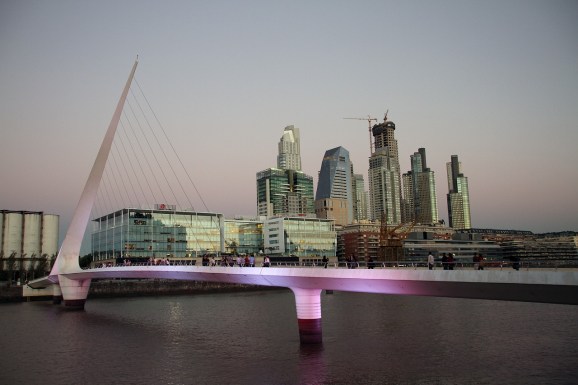 Argentina’s economy and startup ecosystem might look frankly chaotic to the casual observer, but the situation is actually governed by countless subtle factors and shades of gray. Against this backdrop, cryptocurrencies are adding a splash of color — and a hint of optimism — to the South American country’s beleaguered funding landscape.

A lot has been written about the current state of finance and technology in Argentina, a country whose already struggling economy shrank 5.8 percent in May of this year, leading to fears of a looming recession. As a result, the country sought an emergency loan from the International Monetary Fund (IMF), a deal that comes with significant strings attached.

The $57 billion bail out — which is an increase over the originally planned $50 billion — includes a commitment to zero deficit by 2019. But the decision to work with the IMF hasn’t gone down well in Argentina.

Thousands of Argentinians staged a nationwide strike last Tuesday to protest the current president’s austerity measures. That’s no surprise, as many blame the IMF for encouraging policies that led to the country’s worst economic crisis in 2001.

But behind this backdrop of financial crisis and turmoil, there is a glint of hope.

Blockchain technology projects and their associated token events have generated more investment in the region than traditional VC funding of late.

AstorGame raised over $11 million in January. Flixxo followed that with a $5 million raise, and Decentraland grabbed $24 million.

These crowdfunding rounds followed the success of Ripio Credit Network, which last year raised $37 million and is one of those rare beasts — a blockchain startup with a working product and hundreds of thousands of users.

That’s $77 million in total among just four projects, and the current landscape is seeing hockey-stick growth, with cryptocurrencies making an impact across the economy.

While the number of Bitcoin users in Argentina wouldn’t appear on many global league tables, it is one of the few countries where Bitcoin is used by regular consumers for real retail transactions.

One bank has even stated that it will stop using the international payment protocol SWIFT in preference for Bitcoin.

To get a better sense of why blockchain and cryptocurrencies are doing so well in the country, I sat with Ripio CEO and cofounder Sebastian Serrano at the Future in the City conference in Moscow earlier this year.

Serrano explained why crowdfunding through crypto is picking up speed.

“It’s a feasible alternative to raise funds and finance large-scale projects,” Serrano said. “This is a huge thing in Latin America and other emerging economies because venture capitalists that can afford big projects are practically non-existent in the region.”

That’s true. While the country is seeing a surge in VC activity, there are only three VCs with a significant fund available to them, and all three are small by U.S. standards.

“The result is that fintech entrepreneurs have to turn to Silicon Valley-based investors, which is quite a difficult endeavor for most of them,” Serrano said. “Plus, the inherent bureaucracy of getting those funds to the country makes it even more difficult to achieve.”

That bureaucracy is one challenge many startups can’t rise to — despite the government announcing sweeping reforms intended to improve the situation. These will take a long time to become impactful, and they don’t alter the often prohibitive terms VCs apply to funding deals.

All of this means startups must find new ways to build their businesses, a prospect that, while exciting, comes with some caveats.

“ICOs have already become the best way to finance projects,” Serrano said. “This year, teams based in Argentina have raised more capital from ICOs than from VCs. How the ecosystem evolves and, most of all, how future regulations will affect it, is something that remains to be seen.”

“The Argentine case is quite particular, because there are plenty of good projects, and even the government is driving the fintech ecosystem to evolve, but there are no ways of getting financed,” Serrano said. “ICOs have emerged as the first alternative ever for tech startups to get financed as companies from developed countries do.”

And blockchain financing has other benefits built in by default.

“Two things that are amazing about this technology are that, first, it’s truly global and allows [startups] to capitalize a project from a global community. And, second, it also solves a huge issue in the region, which is liquidity. The lack of developed capital markets poses a problem to traditional venture capital investors — which is access to liquidity to get gains from investments — which also creates friction to re-invest that capital.”

With action from the government, new ways to finance, and many strong founder networks that offer peer support, Argentina looks — from a startup perspective — to be on the rise.

“Argentina is ready to be the next tech hub in Latin America — mainly because there are disruptive ideas around, and even better professionals,” Serrano said. “If we add a feasible way of getting those ideas financed to the mix, we could reach a great conclusion as a result.”

But many, including Serrano, feel the acceptance and augmentation of that IMF loan has cast a dark cloud over the future. The $50 billion target was already a significant amount to pay back (and pay interest on), and the $57 billion settled on makes the task all the more daunting.

“The IMF loan is only financing the government debt,” Serrano said. “Argentina currently has a large account deficit (public spending is greater than what is produced). So the loan won’t fix the problem by itself. Argentina has to reduce its deficit and increase its exports so as to have a commercial surplus again. Taking this loan is forcing the country to reduce the deficit, which is very likely to affect the country’s growth.”

And Serrano has little confidence that the government will manage this effectively, especially after the IMF’s last intervention.

“Whether the IMF loan means an improvement for the country or an unpayable burden in time will depend on the government’s financial skills,” Serrano said. “Sadly, our past experiences taking these same kinds of loans from the IMF didn’t get to a good ending, either for the country or its people.”

With all of these complexities in play, startups in Argentina’s growing tech scene face an uncertain landscape, but many believe blockchain could be the answer they’ve been looking for.

So, how does Serrano see Argentina taking this technology and its associated crowdfunding element to the next level?

“ICOs are the first step, because they represent the financing side of the equation,” he said. “The second step would be the strengthening of new companies and disruptive projects that can offer real solutions to financial inclusion. If these companies manage to give access to the entire segment of the population with no access to a formal economy, there can be a truly radical change. At Ripio, being one of the leading fintech companies in the region, we aim to democratize access to the new digital economy, and all of our products are built with that goal in mind.”