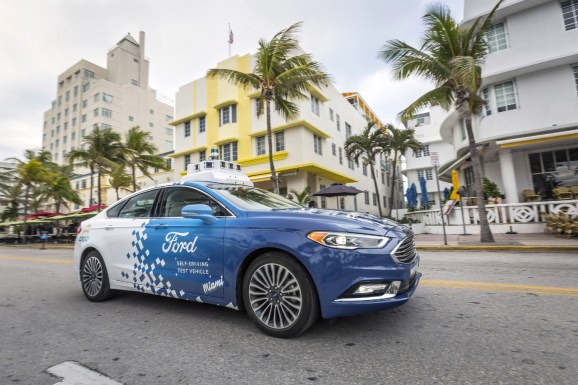 One of Ford's self-driving vehicles completing a route.

Self-driving cars have a perception problem. In a pair of surveys published by the American Automobile Association in January and Gallup in May, 63 percent of people reported feeling afraid to ride in a fully self-driving (Level 5) vehicle. And three subsequent studies this summer — by the Brookings Institution, the think tank HNTB, and the Advocates for Highway and Auto Safety (AHAS) — showed that a majority of people aren’t convinced of driverless cars’ safety.

Ford, which this year committed $4 billion to its newly formed Ford Autonomous Vehicles unit and which expects to put self-driving cars into commercial service by 2021, believes transparency is the key to acceptance. In a Medium post published this morning, it called for a standard “self-driving car language” to communicate intent.

“The idea that pedestrians, cyclists and scooter users should change their behavior to accommodate self-driving cars couldn’t be further from our vision of how this technology should be integrated,” John Shutko, human factors technical specialist for self-driving vehicles at Ford, wrote. “It’s why we’ve been hard at work developing an interface we believe will help self-driving vehicles seamlessly integrate with other road users.”

One of its experiments involved a light bar mounted to the top of a Ford Transit Connect van. In partnership with the Virginia Tech Institute (VTTI), the company tested three different lighting scenarios — two white lights moving side to side to indicate yielding, a solid white light to signal active driving, and rapidly blinking white lights to indicate the vehicle was beginning to accelerate from a stop — on 2,000 miles of road, and recorded onlookers’ reactions with cameras.

A follow-up study — this one designed to test “trust and acceptance” of the signals — had participants stand on a street corner to observe a mix of vehicles driving through an intersection, some of which were equipped with the light bars. On average, it took people two “exposures” to suss out the meaning of one of the three lighting patterns, and between five and 10 exposures to learn all of them.

“We want everyone to trust self-driving vehicles … [and] having one, universal communication interface people across geographies and age groups can understand is critical for the successful deployment of self-driving technology,” Shutko wrote.

Ford’s next step is deploying the light bar in the real world. It plans to equip a small fleet of Fusion Hybrid self-driving development vehicles in Miami-Dade County, where they’ll be used by Pittsburgh-based, Ford-backed transportation startup Argo AI. It’s also conducting research in Europe to get a sense of how the signals are interpreted “across regions and cultures,” and it’s working with the International Organization of Standardization (ISO) and the Society of Automotive Engineers (SAE) to settle on a standard that other self-driving car OEMs and automakers will be able to adopt.

“Our goal is to reach an agreement in three core areas — placement of the signals on a vehicle, design of the signals and the color of the light signals themselves,” Shutko wrote. “Of course, we recognize some design elements may need to change as we move forward, and we’re open to working together to do that if necessary to find the best possible communication interface.”

Ford’s proposals contribute to a small but growing body of work in autonomous car signaling systems.

Volvo’s 360c concept employs lights and audible alarms to warn pedestrians and drivers of its intention. And startup Drive.ai’s vans, which hit the streets of Frisco, Texas earlier this year, have roof-mounted screens that display written cues, symbols, and emoji to communicate their next course of action.

“We wanted to set people’s expectations that these are self-driving cars, so that they treat [them] differently from other vehicles,” Sameep Tandon, Drive.ai cofounder and CEO, told VentureBeat in a phone interview this summer.

That appears to be Ford’s endgame, too.