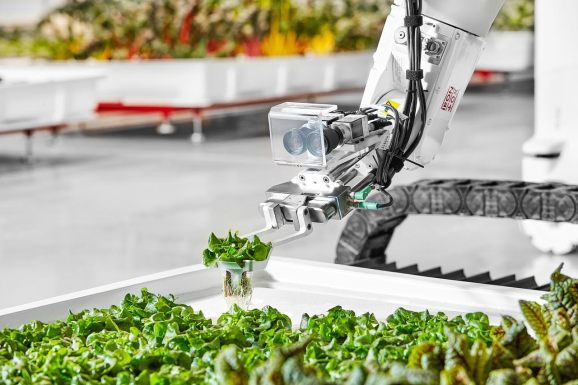 Farming is hard work. The more than 2 million farms in the U.S. employ roughly 925,000 people to perform tasks like planting, seeding, and inspection, contributing to total production expenses of $350 billion in 2017. But without an increase in agricultural productivity of at least 60 percent, the world might not grow enough for the projected global population by 2050.

The looming crisis inspired the cofounders of Iron Ox, a three-year-old San Carlos, California-based startup, to tap a database of horticultural knowledge and robotics in designing an indoor farm for the future. Iron Ox isn’t the only company to apply  automation to farming — New Jersey’s AeroFarms leans heavily on intelligent machines, as do startups Bower and Plenty — but it claims it’s the first to fully automate the growing process end-to-end.

“At Iron Ox, we’ve designed our entire grow process with a robotics-first approach,” Alexander said. “That means not just adding a robot to an existing process, but engineering everything … around our robots.”

Iron Ox’s first 1,000-square-foot farm, which is in full production as of this week, taps a robotic arm equipped with a camera and computer vision systems that can analyze plants at sub-millimeter scale and execute tasks like planting and seeding. A 1,000-pound mobile transport system roughly the size of a car, meanwhile, delivers harvested produce — including leafy greens such as romaine, butterhead, and kale and herbs like basil, cilantro, and chives — using sensors and collision avoidance systems “similar to that of a self-driving car.” Cloud-hosted software acts as a sort of brain for the system, ingesting data from embedded sensors and using artificial intelligence (AI) to detect pests, forecast diseases, and “ensure cohesion across all parts.”

It might sound like pricey tech, but Alexander and company said they worked to keep costs down by using off-the-shelf parts and implementing a scalable transport system. (The plants, which grow in a tightly spaced grid pattern, are delivered via trays.) Other savings come from high-efficiency LED lighting and a hydroponic growing system that cuts down on unnecessary water usage by 90 percent.

Iron Ox claims that within a year produce sales will be able to cover its initial investment. That’s critical at a time when agricultural incomes are on the decline. Between 2013 and 2017, there was a 45 percent drop in net farm income, the largest such three-year downswing since the start of the Great Depression.

At the moment, Iron Ox isn’t an entirely autonomous operation — a plant science team taps the data coming in to formulate standard operating procedures to ensure food safety, plant health, and crop growth. This hybrid approach enables the farm to respond to individual plant’s needs, Binney says, and has the potential to achieve 30 times more produce per acre (about 26,000 heads of lettuce and other greens) than traditional growing operations.

“We’re not just growing sustainable and affordable produce; we’re capturing huge amounts of actionable data,” Binney said. “This trove of data means that we can make sure every plant leaving our farm is perfect, and we will have the world’s largest dataset of plants and highly accurate algorithms for disease identification.”

To date, Iron Ox has raised $6 million in seed funding. It intends to sell its produce to restaurants and grocery stores in the coming months and to expand to additional locations in 2019.