Apple doesn’t hold events every October, but when it does they tend to be important — not as important as its September iPhone events, but an opportunity to spotlight significant new iPad and/or Mac developments that might otherwise have been ignored. This year, we’re definitely expecting an October event, and though this should be firmly understood as speculation, evidence is mounting for a fairly late showing.

As a general rule, Apple’s October events have come within less than a week of its annual fourth-quarter earnings announcements — virtually all of which are in the last week of October or first days of November. This year’s fourth-quarter earnings announcement has been scheduled for November 1, 2018, which could mean an Apple event anywhere in the last week of October, or conceivably in the first week of November, though there isn’t recent precedent for the latter option.

Thanks to the upcoming release of the iPhone XR, October is looking pretty packed for Apple. While the phone hits stores on October 26, preorders begin a week earlier on the 19th, and the company will have to seed devices to reviewers ahead of one or both of those dates. (It typically gives reviewers a week of embargoed time with new phones and will also likely need to give some newly announced devices to reviewers at the event.) 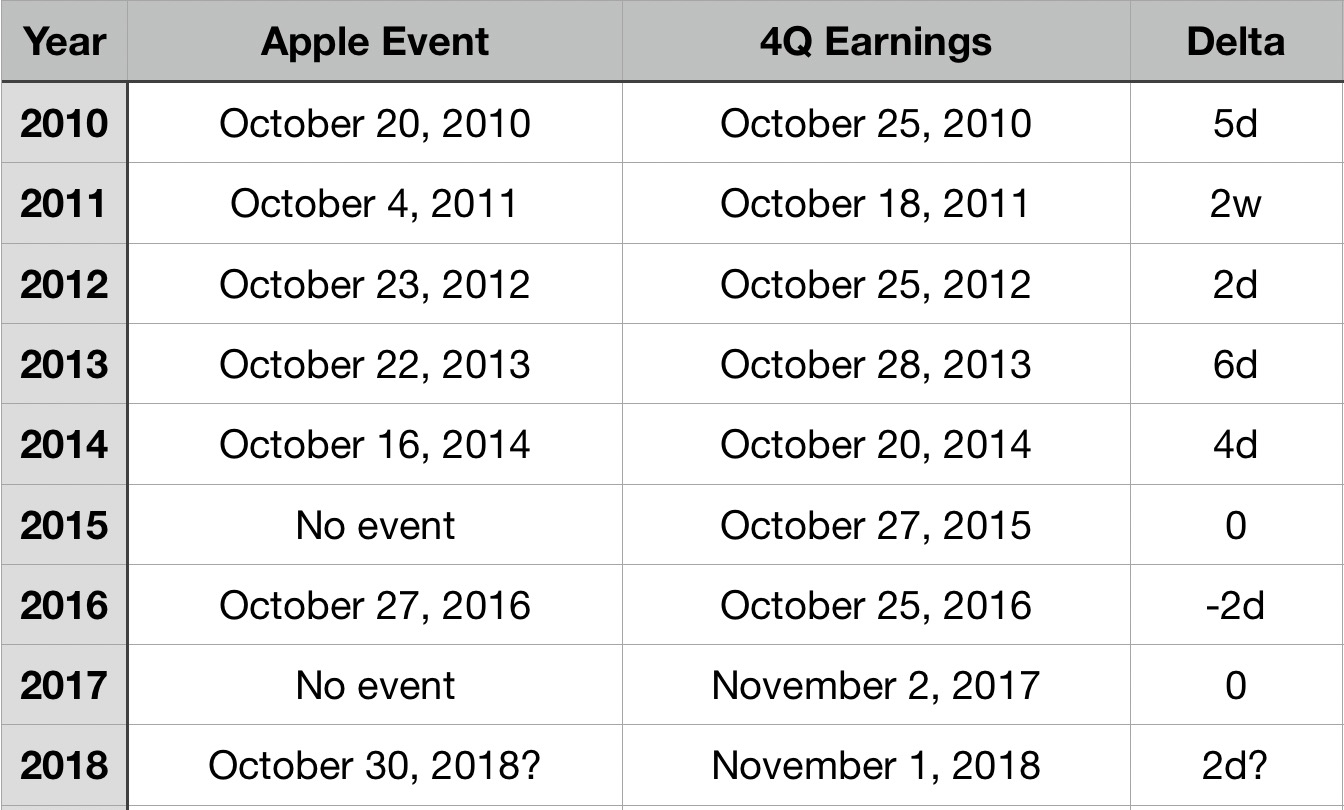 Above: Apple’s October events are generally only separated by days from its fourth-quarter earnings announcements.

October 23 might have been a good slot between the iPhone XR preorder and store dates, but it looks like Apple CEO Tim Cook — always the head speaker at Apple’s events — is going to be busy. He was just confirmed today as a keynote speaker at a European Union data privacy event on October 24 in Brussels. Though he could prepare for two completely different speeches on two different continents at once, that’s a lot to ask of anyone.

Holding the event on or around October 30 would make the most sense, given Apple’s history. That would give the iPhone XR its own opportunity to shine (and rack up preorders) rather than sharing the spotlight with iPads and Macs. Then Cook could have a brief chance to catch his breath after the EU keynote, and the company could get the rest of its holiday lineup announcements out of the way just before its fourth-quarter earnings call, as is normally the case.

We’re expecting redesigned iPad Pros, the first Mac mini update in a long time, a new 13-inch Retina MacBook, and spec-bumped Macs to debut at the event. If the event does in fact happen in late October, Apple fans can expect a busy November, as new iPads, Macs, and related accessories would start hitting stores over the following couple of weeks.