Observer Analytics has launched its analytics platform for virtual reality, augmented reality, and mixed reality. That’s a lot of realities, but the truth is it isn’t clear which of these new technologies will become the biggest.

Observer Analytics believes they all have to be quantified and sees its job as quantifying VR and AR engagement and coming up with the new key performance indicators (KPIs) for the industry.

It’s a bit tricky. For instance, you could put a billboard ad in a virtual reality scene, but if the user doesn’t look in that direction, it won’t get a view.

The company has raised $685,000, to date, including a pre-seed round from Boost VC and Precursor Ventures.

Observer was built from the ground up to analyze complex forms of user engagement now present with immersive technology platforms, including VR, AR, and XR. The platform makes it easy for developers and content creators alike to make sense of how users are interacting with their immersive 3D experience.

“As a result, developers face new challenges in effectively capturing user data and deriving insights to help inform product decisions and roadmaps,” he said. “Observer Analytics bridges the gap by empowering VR and AR creators to easily track and analyze this new category of interactions.”

For example, you have to measure how users physically move, where they look, and what they touch.

Observer is already working with over 50 companies, including FitXR, Alvios Games (QuiVr), Flipside XR, and MomentXR.

The platform was founded by former VR developers who were their own first customer when building their first app back in early 2016. 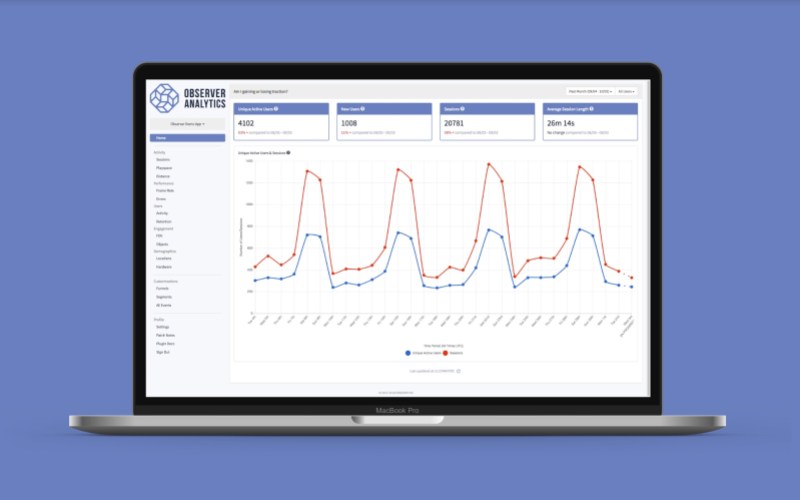 “When our team was developing our own social VR application in 2016, we continued to struggle with not knowing how users spent their time in our experience,” Toohey said. “Because designing for three dimensions is a new frontier, our design and development decisions were rooted in assumption, and we simply hoped that our design was intuitive. However, our usage and retention metrics said otherwise. We’re hoping to eliminate the guesswork for all VR and AR creators.”

Observer makes it easy for developers to integrate in just minutes. The drag-and-drop software development kits (SDKs) simplify the integration process and instantly track dozens of metrics out of the box, mitigating the need to manually track the metrics developers care most about.

The company supports both Unity and Unreal Engine, with plans to add support for WebXR in the near future.Through their current web-based dashboard, anyone can easily analyze metrics such traction, retention, engagement, and physical interactions to better understand how their audience is engaging with the experience. The company offers a free version of the analytics tools and a paid version, under a software-as-a-service model.

As Toohey further explains, “With the lack of standards in the VR and AR space, developing for these new technologies is like the Wild West. Our goal is to help push the VR and AR industry forward by helping content creators achieve their goals of building and launching more intuitive and immersive experiences. We hope to create industry standards based off of data to accelerate the iterative design and development process for future creators.”

Jacob Copus is chief technology officer and Justin Cellona is chief product officer, and the company is based in San Mateo, California.