Year after year, startups in U.S. cities like San Francisco, New York, and Boston continue to raise an unprecedented amount of venture capital — but so do companies in other parts of the world. Now, a new report out today from the Center for American Entrepreneurship gives cause for concern about whether the U.S. will remain the top place for startups.

The share of global venture capital activity captured by the United States has fallen from more than 95 percent in the mid-1990s to 71 percent in 2012 to half in 2017, according to the report’s analysis of PitchBook and VentureSource data. The report, coauthored by Richard Florida and Ian Hathaway, examines the rise of global startup hubs.

This is all happening while year-over-year, the U.S. continues to see both its total number of venture capital deals, and the amount of VC money invested, rise.

“I think for the first time, the U.S. is truly in trouble,” Florida said during an event at New York University in September previewing the report. “We’ve lost half of our competitive advantage in 25 years — I don’t know how that’s not the biggest alarm bell in D.C.” 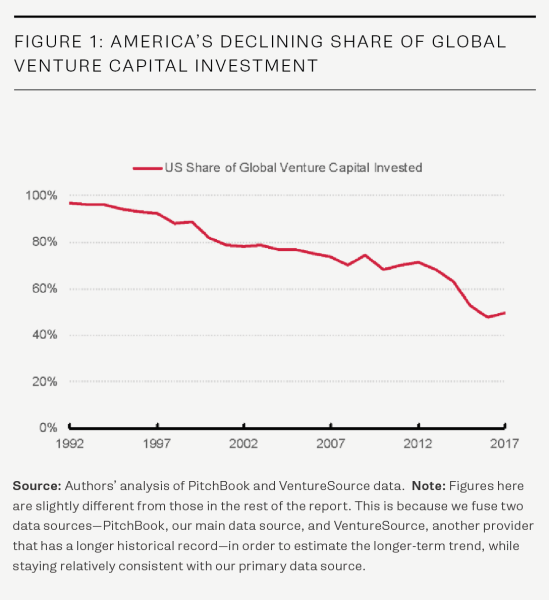 Meanwhile, India’s status has been buoyed by the fact that it has a larger number of cities becoming bona fide startup hubs, compared to other countries like the United Kingdom, Germany, and Israel. Bangalore, Delhi, and Mumbai are all among the top 20 cities driving the most global growth in venture capital.

What’s particularly concerning is how the U.S.’ share of global venture capital has fallen most steeply in the past five years. This can partially be attributed to the rise of megadeals — venture capital rounds of more than $500 million — in India and China.

Ant Financial’s $14 billion series C and Flipkart’s $2.5 billion raise from SoftBank before being acquired by Walmart still dwarf the rounds raised by some of the most highly valued U.S. startups. It’s also worth noting that many of these startups raising huge rounds are different iterations of financial payments and ridesharing companies. As Didi Chuxing’s acquisition of Uber’s China operations proves, many of the same startups and firms are fueling investments into one another.

Meanwhile in San Francisco, megadeals accounted for about a quarter of all deals. 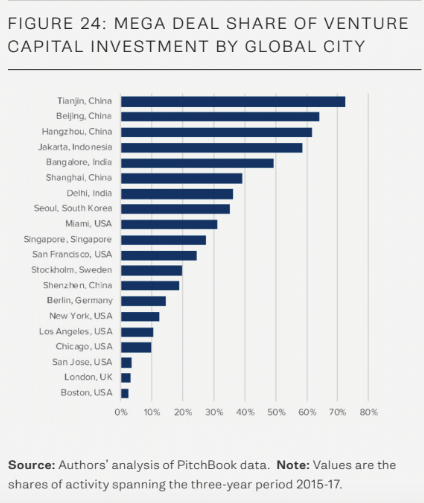 Before venture capitalists start buying their plane tickets to China, Hathaway noted that there are some bright spots for the U.S. in a phone interview with VentureBeat. Of the 20 cities that received the most venture capital over the past two years, nine are in the U.S. And outside of San Francisco, New York, and Boston, smaller so-called second and third tier startup hubs are seeing favorable growth trends.

Among the top 50 cities for angel and seed stage deals are Indianapolis, Columbus, and Las Vegas — cities that haven’t traditionally captured large amounts of venture capital money, but whose growing share of these early-stage deals indicate that they one day could. And the 20 cities with the most venture capital deals per capita are dominated by U.S. college towns like Boulder, Austin, Durham, Ann Arbor, Provo, Madison, and Bozeman — in addition to San Francisco and San Jose. These two data points make the case that startup activity in the U.S. is spread out more evenly than in other places, even with Silicon Valley’s reputation as being the center of it all.

“When you zoom out a little bit, it does feels like those cities, the Pittsburghs or the Cincinnatis or the Columbuses of the world are actually doing pretty well,” Hathaway told VentureBeat.

One of the biggest takeaways from the report is that entrepreneurs have more cities than ever to choose from if they want to start a company in a place with the potential to raise venture capital. Hathaway says this data should give U.S. lawmakers even more reason to think about what else they can do to lure more entrepreneurs to the U.S.

“I can’t say for sure if those entrepreneurs that are getting funded right now in Jakarta and Stockholm and London, that they would have necessarily come to the U.S. … but we know that historically, foreign-born entrepreneurs have played a substantial role in innovation-driven entrepreneurship in the U.S.,” Hathaway said.