Insta360 has launched the Insta360 One X virtual reality video camera, which can film imagery in 5.7K video resolution. It can capture VR video in 360 degrees, and it includes stabilization and cinematic slow motion effects, which are cool features for a consumer camera.

With apps available for both iOS and Android, you can manipulate the image both during and after capture. The Insta360 One X is available today for $400.

The company previously launched a VR camera in 2017, and it followed up in August with the six-lens Insta360 Pro 2 VR camera for 8K-per-eye image capture. That camera is aimed at professionals, while the Insta360 One X is aimed at action-oriented consumers.

The Insta360 One X has an unlimited field of view with gimbal-level stabilization (with no gimbal) and new high-FPS shooting modes. The company says it lets you manipulate time and perspective in ways that make it feel more like a fleet of cameras than a single device.

The One X uses the FlowState stabilization algorithm, analyzing movement in all directions to achieve better stabilization. FlowState lets users capture smooth video with no accessories. You can mount the One X anywhere — from a helmet to a selfie stick to a whitewater kayak — and footage comes out looking like it’s been professionally stabilized.

The magic in the device is that it lets you choose the best way to frame an experience after it’s over. There’s no need to point your camera, and you’ll never miss a shot, the company said. Using the One X’s editing app, users can easily reframe and re-edit the best parts of a scene, creating cinematic clips that would never be possible with a traditional camera.

The camera’s new TimeShift feature lets users adjust the speed of different parts of a clip on a whim. Users can highlight key moments with cinematic slow-mo, or speed things up to suit the rhythm of the scene. 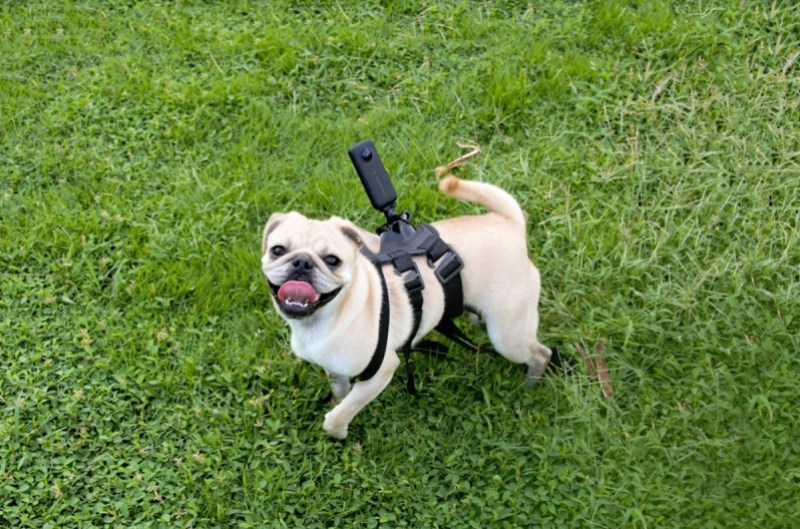 Above: Yup. Even your dog can shoot VR video.

Using the One X app, users can automatically remove a selfie stick from their scenes, leaving the One X apparently suspended in mid-air. The result is the ability to shoot aerial angles without a drone. You can pair the One X with Insta360’s customized 10-foot selfie stick.

The previous Insta360 One camera introduced the Bullet Time shot, an orbiting perspective that puts a user at the center of a slow-mo shot. The One X takes this concept to the next level with a wider field of view and a sharper 3K resolution. 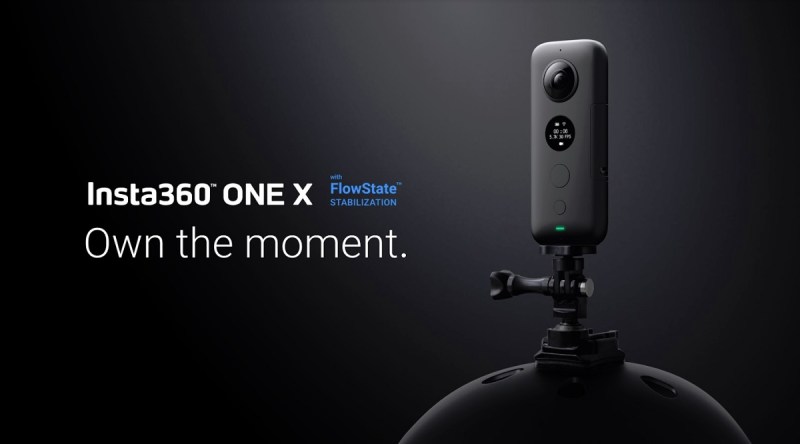 Above: Insta360 One X VR camera

Users can connect to the One X via Wi-Fi. When you are ready to transfer footage back to your phone for editing and sharing, you can send it over Wi-Fi or connect directly with a data transfer cable (Lightning, USB Type-C and Micro-USB cables come standard with the One X).

And the new One X app allows for easy multi-clip editing, letting users create montages of their best shots. The One X has a removable 1,200mAh battery, which can last about 60 minutes while shooting.

The One X comes with dedicated HDR modes for photo and video, allowing for shooting in various lighting conditions.

The Venture Case is a tough shell designed for above-water shooting, which offers splash protection and waterproofing to 5 meters. The Dive Case is built to breach the depths. Specialized dome lenses allow for underwater 360 shooting — with a clean stitch — down to 30 meters.