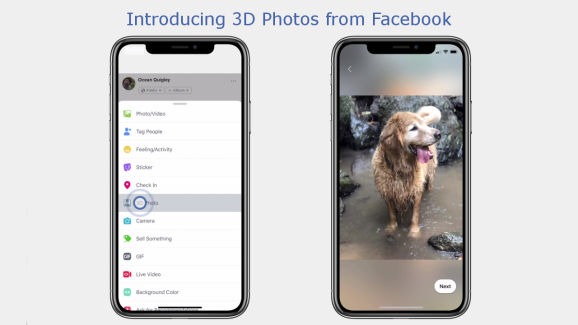 Leveraging the extra “depth” data found in certain recent iPhone photographs, Facebook today announced the rollout of 3D Photos: images that look flat at first, but can be examined from different angles either through Facebook itself, or using Oculus VR headsets.

The basic premise of a 3D Photo is that the dual cameras on the iPhone 7 Plus, 8 Plus, X, and XS model can capture depth data in addition to the flat image — data that has generally been used solely to create blurred backgrounds in portrait mode. However, software can use that data to understand some of the scene’s three-dimensional characteristics, then simulate them in an image you can move around with your finger or a cursor.

“Simulation” is the key word here. iPhone apps have offered similar functionality since before Apple started to include depth-sensing cameras on its devices, and the results ranged from somewhat interesting to ghoulish; imagine a person appearing to bulge out of a flat surface as if their skin were attached to the wall. But with newer cameras and better depth data, Facebook’s results can look pretty believable. The company suggests composing images with multiple layers, colors, and textures to achieve the best results.

You’ll need one of these listed iPhones to create a 3D Photo; doing so is just a matter of creating a Facebook post; tapping on the three dots (a new addition) to bring up a list of post options; selecting 3D Photo; and picking an image from your Portraits album. Once posted, the image will be viewable by any Facebook user, as well as in VR through the Oculus Browser on Oculus Go or Firefox on the Oculus Rift.

The viewing feature is rolling out to users today, and the creation feature will start with some users today, becoming available to everyone “in the coming weeks,” so it may or may not be available when you go to use the app. A tutorial video is available here.