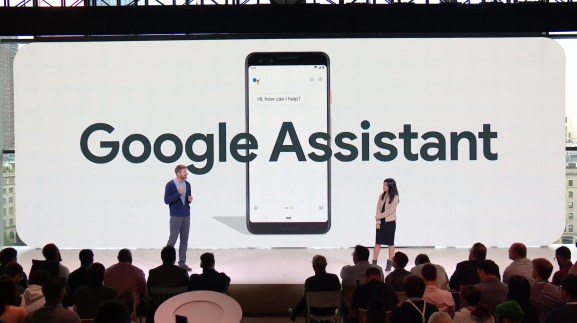 Google Assistant will soon be able to answer questions from the lock screen of Android smartphones. Today, Android phones can only respond to the “Hey Google” wake phrase when unlocked with a 4-digit pin or fingerprint scan.

The update, one of many announced today being rolled out in the coming weeks, means Android phones will respond to queries like “Hey Google, what’s next on my calendar?” or “Hey Google, show me my unread emails.”

Lock screen access will also be able to help schedule alarms or timers, create reminders, find information about nearby restaurants, or answer personalized questions about your calendar or commute to work, a company spokesperson told VentureBeat in an email.

Google Assistant on Android phone lock screens will rely on Voice Match, a service for identification of unique voices introduced in April 2017 that is able to differentiate up to 10 Google Home users in a household.

Lock screen answers are sure to make Pixel Stand, a $79 mount and charger for Pixel smartphones, that much more appealing. When the phone is placed in the stand, users can complete some basic tasks with touch or voice such as set a reminder or hear about traffic on the way to work.

Google Assistant with Android is also getting an update to the visual snapshot. The snapshot appears after a long press of the home button and swipe up and was first introduced this summer.

Visual snapshot will tell you about the weather, your calendar, and when the next bus to work is scheduled to arrive, as well as look into your Gmail to tell you about bills that need to get paid or deliveries coming soon.

Call Screen, a feature that lets you use conversational AI similar to Duplex, will be made available for other Pixel phones in November.

During Call Screen interactions, an automated voice introduces itself and allows you to use touchscreen commands to ask questions to unrecognized numbers before answering the phone.

Also coming soon: Downtime for Home smart speakers. Downtime is Google’s well-being initiative that lets you decide when each speaker in the home will respond to voice commands. Speakers placed in Downtime will only be able to respond to requests to create alarms or timers.

You can say “Set wind down for 10 p.m.” and get the answer to “How much time have I spent on my phone today?”

Also announced today: Smart Displays that speak with Google Assistant will get a series of upgrades like the kinds showcased for the Home Hub earlier this week. This includes the ability to display Live Albums, answer the Nest Hello video doorbell when it rings, and Home View, the ability to swipe down on the screen to control all the IoT devices in your home.

All smart displays will also be able to join multi-room audio groups together with other Home speakers.

The Lenovo Smart Display was released in July, while the JBL Link View made its debut last month. A third smart display from Sony is also on the way.

Smart displays from Google Assistant compete with Amazon’s Echo Show as well as Facebook’s Portal and Portal+, which made their debut earlier this week.