Adobe Premiere Rush (previously Project Rush) is, as you might recall, a cross-platform video editing app for smartphones, tablets, and PCs. It became available in beta this summer for select customers, and today during Adobe’s annual Adobe Max conference in Los Angeles the company announced that it’s launching broadly on PC, Mac, and iOS devices.

A host of improvements are on the way. Android support will land next year, along with video speed controls and the ability to simultaneously publish videos to multiple platforms.

“A new user, from the first time they launch [Premiere Rush], can get a high-quality video in three minutes or less,” said Steve Forde, general manager of emerging products at Adobe, during a media briefing earlier this year. “It’s an identical product with the same features on iOS, Android, Windows, and Mac. You can jump back and forth and it automatically synchronizes.” 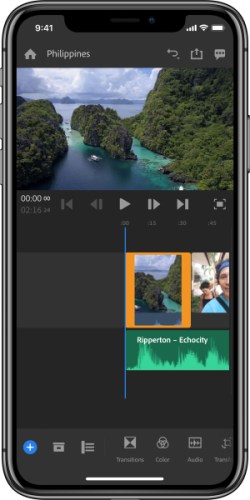 Among Adobe Rush’s core features are integrated color, audio, and motion graphics tools and one-click publishing to social media sites like Facebook and YouTube, with support for native YouTube features like video scheduling and thumbnail selection. Also included is auto-ducking, which leverages the power of Adobe Sensei to automatically generate clip volume keyframes from music to reduce the volume when dialogue, sound effects, and other audio elements are present.

On Android and iOS, kicking off an edit in Premiere Rush begins with selecting video clips from the app’s Locations screen or from Adobe Stock. Adobe Creative Cloud and Dropbox users can import footage and audio stored in their respective accounts.

It’s optimized first and foremost for touchscreens. Premiere Rush’s preview window and playback controls take up the top third of the screen. The timeline sits in the middle, above a carousel of menus that lets you fiddle with transition animations, color grading, audio, transformations, aspect ratio adjustment, title cards, and motion graphics templates. Tapping and dragging on the end of a video clip, audio clip, or effects track in Premiere Rush’s timeline adjusts its length, and selecting the center lets you move it forward or backward in the timeline. 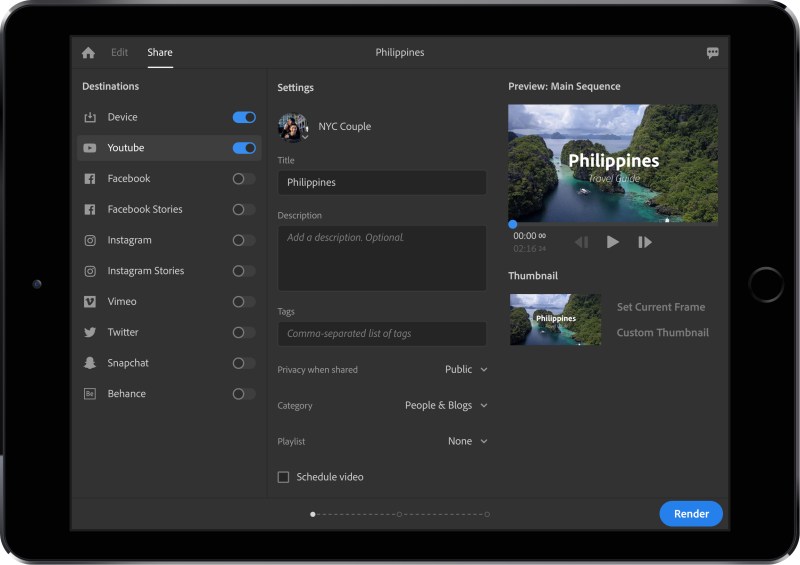 Premiere Rush clients for Windows and Mac are cut from the same aesthetic cloth as the mobile apps, and it’s a seamless transition from mobile to desktop. Project files are synced to the cloud and associated with your Adobe ID so that when you sign in, you’ll be able to pick up where you left off.

Rush is available starting today from Adobe’s website and the iOS App Store, with Google Play Store availability coming in 2019.

“With [Premiere] Rush, we’re enabling high-quality content delivered at scale in a way that’s never been done before,” Forde said.