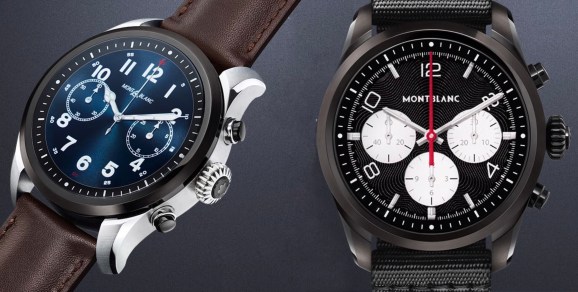 Briefly announced alongside Qualcomm’s new Snapdragon Wear 3100 chipset, the luxury-class Montblanc Summit 2 smartwatch is officially shipping now — and might win some fans despite its $995 starting price. While Summit 2 is powered by the latest version of Google’s Wear OS and has all the digital features you’d expect from that platform, the metal-bodied wearable ships with a collection of timeless Montblanc analog faces that will appeal to fans of old school watches.

Montblanc left Summit 2’s specifications somewhat ambiguous at the Qualcomm launch, but now more of the hardware details are public. The watch is waterproof with 50-meter submersibility, and ships with 8GB of memory, GPS, and NFC capabilities. A prominent rotating crown and two programmable buttons are on the right of the 42mm “unisex” watch.

Because of the Snapdragon Wear 3100 chip inside, Montblanc is promising a week of continuous battery life if Summit 2 is being used solely for time, though it also includes plenty of worthwhile app functionality that will discourage passive timetelling. In addition to Google Assistant and Google Pay support, Montblanc includes a Timeshifter app to eliminate travelers’ jet lag, a Travel Info reference app for use in foreign countries, and a Montblanc Running Coach app for fitness. Use of the fitness tracking, GPS, and other features cut the battery life down to two days between charges.

Four different finishes are available, including steel, bicolored steel, DLC coated steel, and titanium, the latter sold at a $100 premium. Leather, nylon, and sport bands are available for $130 each, with one included at the standard $995 price, while a milanese band comes at a $235 premium.

Montblanc says that the steel versions are available to ship now through its website with express delivery, and can be tested in person at its boutiques. The titanium model is not yet shipping. Additional Snapdragon 3100 watches with similar battery life — but less fancy designs — are expected to become available later this year and early next year.