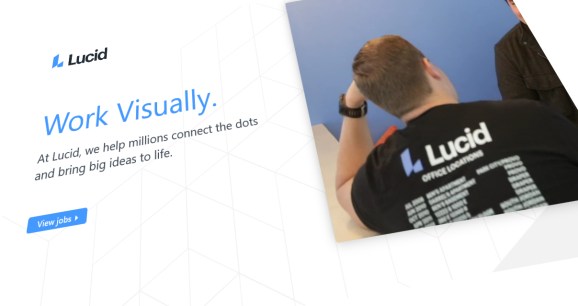 Web-based visual design platform Lucid Software has raised $72 million in a round of funding from Meritech Capital, Iconiq Capital, and Spectrum Equity.

Founded in 2010, Lucid Software is best known for its flagship Lucidchart product, which is kind of like a Microsoft Visio-style collaborative diagramming app that’s used for wireframing, UI prototyping, and similar use cases. Companies can use it to create an organizational HR chart, for example, though in reality anyone from freelancers to students can use the software.

The company also develops a drag-and-drop design program for creating print and digital publications, which it calls Lucidpress.

Prior to now, Lucidchart had raised just north of $40 million in funding, including a $36 million tranche two years ago, and with another $72 million in the bank, it said that it will accelerate its product development and chase global growth, with plans to open its EMEA headquarters in Amsterdam in early 2019.

Lucidchart competitors include tools from the likes of Adobe and, as noted, Microsoft Visio, while other players in the field include SmartDraw, Gliffy, and the open source Draw.io. Lucidchart aims to differentiate itself through a combination of “ease-of-use, access on any device or platform, real-time collaboration and advanced functionality, like automating diagrams and combining them with external data sources,” a spokesperson told VentureBeat.

“Lucid Software is driven by the vision that when people think and communicate visually, we can work faster, collaborate more effectively, and be more innovative,” added Lucid Software CEO and cofounder Karl Sun. “Though Lucidchart started as a replacement for traditional, hard-to-use diagramming applications, our ambitions have always been far greater. We are determined to make working visually an integral part of the future of work, ensuring that innovators everywhere can turn the best ideas into reality.”

Lucid Software claims 15 million users globally, and said that it is attracting 700,000 new users each month from 180 countries. Clients include Google, and NBC Universal.