Today, Facebook released a report detailing the U.S. groups that have spent the most on Facebook political ads since May, and the top spot belongs to a familiar face.

Since May, Facebook has spent more than $12 million on “ads related to politics and issues of national importance,” spread across Facebook and Instagram. The next two biggest spenders are Beto O’Rourke — whose Beto for Texas campaign group has spent about $5.37 million on Facebook ads, followed by Donald Trump, whose Trump Make America Great Again Committee spent about $3.14 million. An independent analysis from a group of NYU researchers earlier this month also found O’Rourke and President Trump to be top spenders on Facebook.

The ad archive report released by Facebook is the first of its kind since the company introduced its ad archive in May, so that users could see how political advertisers are targeting people on Facebook, even if a specific ad isn’t targeted towards them.

A quick search of Facebook’s political ad archives shows that most of the ads Facebook have purchased are meant to promote the company’s recent changes to make political ad purchasing on the platform more transparent, as well as to secure elections. 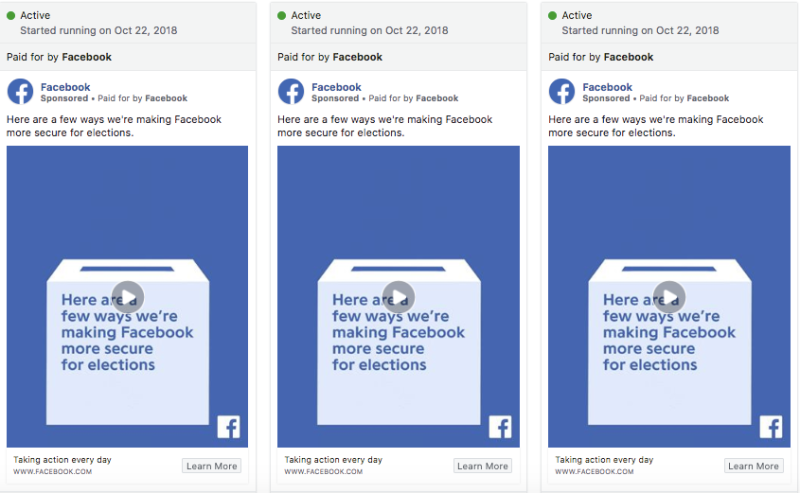 In total, U.S. political advertisers have spent more than $256 million on more than 1.67 million ads since May. That puts the average cost per ad just below $153. A Facebook spokesperson told VentureBeat that the $256 million total does not include the more than $12 million spent by Facebook.

Earlier this year, Facebook also went on an ad blitz after the Cambridge Analytica scandal broke, purchasing full-page ads in the New York Times, the Washington Post, and other papers to apologize for the “company’s breach of trust.”

It’s noteworthy that Facebook spent so much money purchasing ads to remind users about the changes they’ve made, given that they could likely do so without spending any money through the use of push notifications. But Facebook has made enough changes in the past two years that evidently they feel the need to constantly remind users about how they are trying to make users feel like they can trust Facebook to not be stymied by foreign interference come election season.

Since the 2016 U.S. presidential election, Facebook now requires U.S. advertisers to verify their identity and location before purchasing political ads. And just last week, Facebook announced that it would no longer allow content that “misrepresents how people can vote,” such as posts that falsely claim that people can vote by mobile app.