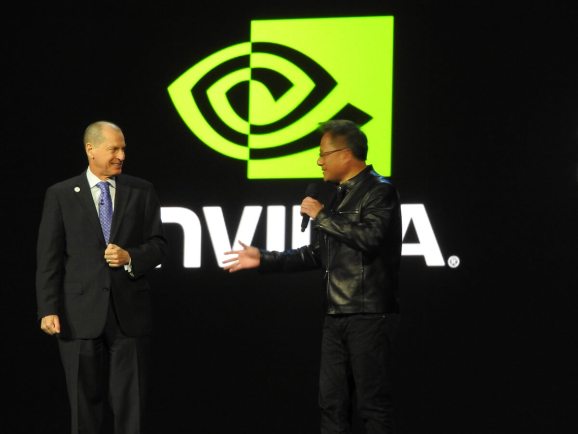 Gary Shapiro (left) and Jen-Hsun Huang of Nvidia opened the show at CES 2017.

Nvidia and Scripps Research Translational Institute (SRTI), a nonprofit research body, are teaming up to develop genomics processing and analysis tools guided by artificial intelligence (AI). In the course of a partnership announced today, Nvidia data scientists will colocate with Scripps genomics experts and bioinformaticists to study health care problems “end to end.”

“It’s an extraordinary time in health care and medicine, with the intersection of massive datasets and our expertise in wearable sensors and genomics,” Dr. Eric Topol, founder and director of SRTI and professor at Scripps Research, told VentureBeat in a phone interview. “That’s what the Institute was founded on 12 years ago.”

The firms’ joint research will focus on whole genomic sequences (the complete DNA sequence of an organism’s genome), continuous physiological wearable devices and other sensors, and illness prevention — specifically, digital sensing prediction of atrial fibrillation, an irregular heartbeat that increases the risk of stroke. Future work will involve as-yet unselected diseases and datasets.

Scripps will supply the bulk of the research datasets, one of which contains over 1,000 continuous heart rhythm recordings (another comprises the entire genomic sequences of 1,400 people ages 80 and older who’ve never been sick). And researchers from both companies will employ a combination of bespoke neural networks and pretrained models in research data experiments. Assuming all goes well, they’ll package up their work and tools and open-source them.

“The goal is to provide methods and infrastructures to the research community at large,” said Kimberly Powell, vice president of health care at Nvidia. “We’re seeing pretty massive breakthroughs [in the field]. Dozens of algorithms are becoming FDA approved now, [and some of them] are transforming the radiology workflow … Radiology and imaging have ridden on the coattails of breakthroughs driven by imaging and video.”

Pharmacogenomics — which examines the role of genetics in the context of how a person responds to drugs — is another field that’s seen encouraging progress. Genoox, which raised $6 million this year in a round led by health care investor Triventures, taps AI algorithms to analyze large amounts of genetic data, runs the data points through a search engine and generates personalized, actionable recommendations.

“AI has tremendous promise to transform the future of medicine,” Topol said. “With Nvidia, we aim to establish a center of excellence for artificial intelligence in genomics and digital sensors, with the ultimate goal of developing best practices, tools, and AI infrastructure for broader adoption and application by the biomedical research community.”

Today’s announcement comes after Nvidia unveiled a partnership with Canon Medical Systems to promote the use of AI techniques in medical and related research. Earlier this month, it embarked on a separate project with King’s College London for “accelerated discovery” of critical data strategies and speed deployment in clinics.