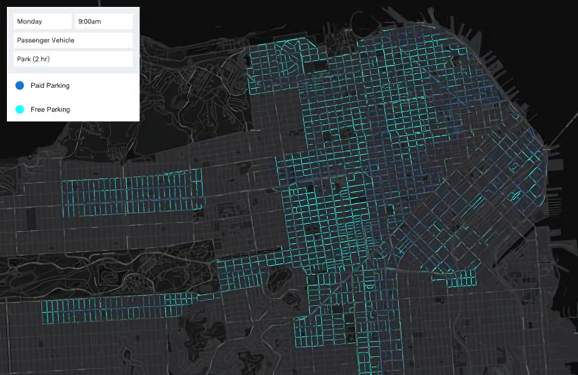 Over 5,000 curbs in busy areas of San Francisco.

Toll, parking, and curb space data are harder to come by than you might think. There are more than 4.12 million miles of road in the U.S. alone; over 300,000 signalized intersections, with 2,550 new ones popping up every year; and approximately 2 billion parking spaces. It’s a lot for anyone to keep tabs on.

That’s why Stephen Smyth cofounded Coord, a startup staffed by former employees of Alphabet subsidiary (and Google parent company) Sidewalk Labs. Fresh off a $5 million Series A round led by Alliance Ventures, with participation from Trucks, Urban.us, DB Digital Ventures, and the aforementioned Sidewalk Labs, the company today took the wraps off Surveyor, an augmented reality iPhone app that enables users to catalog curb features.

“These days, curbs are for more than just parallel parking,” Coord wrote in a blog post. “With the rise of ecommerce and ride-hailing, and with all of the new shared vehicles cropping up, they’re becoming the key to understanding city streets … [W]e assumed that this data would be readily available, [but we] were wrong.”

As Coord explained, it’s not that curb data doesn’t exist — car-mounted sensors like Google’s Street View fleet have recorded tens of millions of miles’ worth. The trouble is, the data’s often incomplete, and in some cases erroneous. Trees and other obstructions obscure street signs. Miscalibrated vehicle headings make it tough (and sometimes impossible) to suss out locations. And curb cuts, loading zones, meter prices, and curb paint aren’t consistently visible from street level.

That’s where Surveyor comes in. Employing no more than a phone camera and sensor data, it can hone in on the exact position of street signs and other objects of interest at “a fraction” of the cost and time traditional methods require, Coord claims.

The startup said that over the past year, it’s collected data on more than 12,000 curbs across San Francisco (roughly 5,000 curbs) and Los Angeles (about 7,000 curbs) with Surveyor. (That’s in addition to the more than 200,000 curbs in “key commercial areas” in New York, Los Angeles, San Francisco, and Seattle it previously cataloged, and the 86 percent of tollways in the U.S. on which it has data.)

Surveyor is fairly straightforward, as far as apps go. To mark the beginning of a curb, you tap a button and stop to snap pictures of signs or to note the location of curb features such as curb cuts and paint. Tapping the button again marks the end of the curb, and Surveyor take care of the rest, measuring the curb automatically with the aid of a “patent-pending” algorithm.

“[Surveyor] positions [pictures of curb features] in relation to one another and snap[s] them to the location of the actual curb on a [3D] map,” Coord explained. “[In] many places, GPS is not accurate enough … [p]articularly in cities, [it’s] routinely off by 10 feet or more.”

Coord’s making Surveyor available as part of a subscription; the idea is that government agencies, transportation consultants, and mobility companies will use it to build out local databases. Included with every plan are management tools and training materials, plus one free month of access.

“With the growing importance of curbs in our cities, having a digital picture of the curb rules is essential for the future of urban transportation,” Coord wrote. “That is why we built the Surveyor app and why we’re making it available externally.”

The company’s mission, ultimately, is to build a platform-agnostic database of street-level data that any third party can use. Toll agencies can tap Coord’s APIs to calculate toll prices and communicate them through an app, for example, and bike-sharing companies could leverage its location datasets to pinpoint stations on a map. And cities can use it to better allocate parking zones and manage the flow of traffic.

Earlier this year, Coord announced the fusion of its Routing API and Bike Share API into a single multimodal pathfinding tool with ride-hailing, car-hailing, bike-sharing, and public transit information. It currently offers a Shared Vehicle API for bike and scooter services; a Curbs API for parking, loading zone, and bus stop data; a Tolls API that calculates the cost of an origin, destination, and departure time; the Routing API; and a Parking API with off-street lot, garage, and gated facilities information.

Zipcar, Cintra, Mozio, and Google Maps are among the services using Coord’s data.