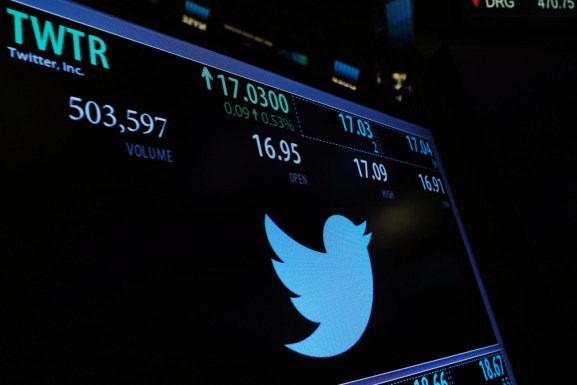 A screen displays the stock price of Twitter above the floor of the New York Stock Exchange (NYSE) shortly after the opening bell in New York, U.S., January 31, 2017.

In today’s third quarter earnings release, Twitter announced that its number of monthly active users has declined for the second straight quarter as the company seeks to rid its platform of spam, bots, and hateful content.

Twitter reported 326 million MAUs during Q3 2018. That’s down from 335 million MAUs last quarter. It was expected that Twitter’s MAU numbers would drop, however this is the largest quarter-over-quarter decline in MAUs in the company’s history.

Twitter also reported that its daily active users grew 9 percent year-over-year, though it doesn’t give the exact number of DAUs. CFO Ned Segal did say that the number of DAUs is still “well less than half of MAU.”

The company did have brighter news to report when it comes to revenue — Twitter generated $758 million in revenue over the last three months, higher than analysts had expected. The company generated a net income of $789 million, thanks in large part to a $683 million tax benefit it took advantage of. Excluding the benefit, Twitter had a net income of $106 million.

The bulk of Twitter’s revenue came from advertising, which totaled $650 million, an increase of 29 percent year-over-year. This is the fourth straight quarter Twitter has been profitable.

“This quarter’s strong results prove we can prioritize the long-term health of Twitter while growing the number of people who participate in public conversation,” CEO Jack Dorsey said in a letter to shareholders.

In its earnings call, Segal stressed that “this is the third quarter in a row that we’ve grown revenue in excess of audience,” to ease analyst concerns that the dip in MAU will eventually stymie growth in revenue.

Dorsey also noted that the company’s efforts to increase daily active usage — while trying to rid the platform of spam and bots — will continue to center around creating products that make it easier for users to follow relevant events and topics in real-time.

“Anything we do by focusing more on relevance on timeline, on notifications, continues to see positive results in usage,” said during the call with analysts.

Twitter said the MAU decline was mainly a result of few external forces and internal product choices: GDPR, Twitter’s decision not to move to paid SMS carrier relationships in certain markets — a move that Twitter said was made in the name of platform health — and a product change that reduced automated usage and signup. The company said that it expects the number of MAUs to decline again next quarter.