In August, China-based DJI, which made $2.7 billion in 2017 and accounts for more than 70 percent of the world’s drone market, announced two new additions to its portfolio: the Mavic 2 Pro and Mavic 2 Zoom. But both were strictly consumer affairs. Today at DJI AirWorks in Dallas, Texas, the company expanded its lineup with the Mavic 2 Enterprise, a drone made specifically for the private sector. It starts shipping today for $2,000.

The Mavic 2 Enterprise — with wings that fold neatly into a compact, 905-gram package — is more or less a Mavic 2 Zoom tweaked for commercial use. It has a 12-megapixel, 1/2.3-inch gimbal-stabilized sensor with up to 2 times optical and 3 times digital zoom that can shoot up to 4K, and it uses GPS timestamping to record the time and date images are taken. There’s 24GB of onboard storage available (expandable via MicroSD card) and DJI’s Local Data Mode, which keeps info stored on the aircraft and a paired smartphone. Also in tow are navigational aids like AirSense, which provides real-time position alerts on manned aircraft, and FlightAutonomy 2, an eight-camera, two-infrared sensor system that can autonomously guide the Mavic 2 Enterprise around tight corners and obstacles.

Among the other spotlight features are self-heating onboard batteries that deliver up to 31 minutes of flight time and can survive sub-zero temperatures, a maximum flight speed of up to 45 miles per hour, and DJI’s 2.4GHz/5.8GHz OcuSync 2.0 tech, which can beam live 1080p footage to the drones’ remote control up to 5 miles away (compared to the Mavic Pro’s 1.2 miles). 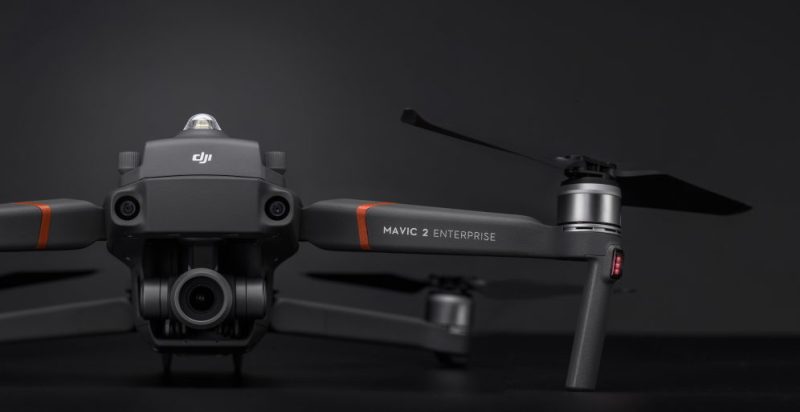 But perhaps the highlight is an extended port that allows pilots to connect modular accessories to the Mavic 2 Enterprise’s frame. The first three out of the gate are the M2E Beacon, a dual flashlight that provides up to 2,400 lumens; the M2E Speaker, a loudspeaker that can play up to 10 prerecorded voice messages; and the M2E Beacon, an ultra-bright LED that DJI says makes the Mavic 2 Enterprise easier to spot from miles away. All three come bundled in the box, along with a remote controller, a spare battery, and a protection kit with flight tools.

DJI’s pitching the Mavic 2 Enterprise as a complement to its Matrice M200 series development kit and as a tailor-made solution for firefighting, law enforcement, emergency response, powerline inspection, cell tower inspection, and bridge inspection. The target clients are startups like Kittyhawk, which raised $3 million earlier this month for AI drone fleet management software that can detect operational, battery use, flight telemetry, and safety patterns, and Cape, a telepresence drone platform.

Companies like AT&T use drones for maintenance inspections and to assist in natural disaster zones, and dozens of local government agencies, like the San Diego Fire Department (SDFD), have begun actively deploying drones as part of the Federal Aviation Administration’s (FAA) unmanned aerial systems integration pilot program. In May, the FAA chose 10 applicants from a pool of more than 160 applications across the country interested in reimagining how drones can be used by governments and private industry.

The global commercial drone market is forecast to grow to $8.8 billion by the end of the year, according to Transparency Market Research.