Sometimes going to the doctor is easier said than done — and often because of circumstances beyond any one person’s control. In New York, Boston, Seattle, Houston, San Diego, and 10 other major cities across the U.S., the average wait time to see a cardiologist for a non-emergency issue is six days or longer, while an orthopedic surgeon can take up to 18 days. Moreover, as many as 30 million Americans don’t live within an hour of trauma care.

Seattle startup 98point6, which exited beta in May after three years in incubation, aims to fill the coverage gap with digital clinics — with the help of artificial intelligence (AI). Today, the startup announced a $50 million Series C funding round led by Goldman Sachs and undisclosed return backers, bringing the total amount raised to $86.3 million. It previously secured $19.5 million in September 2017.

CEO Robbie Cape, a former Microsoft executive and the founder of family organization company Cozi, said the new capital would be used to grow the firm’s product and physician teams, enhance its AI and automation capabilities, and enable new features, such as 24/7 availability and pediatric care.

“Part of the [funding] will be directed to further R&D in automating the clinical encounter,” he told VentureBeat in an email. “The AI and deep technology augment the capabilities and scale of 98point6’s physicians. On the capability side, we enable a physician to follow up with 100 percent of patients to ensure they are on the appropriate path to recovery. On the scale front, through automation — most of which is enabled by artificial intelligence — the physicians are able to focus 100 percent of their time on exclusively diagnosing and treating patients.”

Appointments take place digitally, via an app for Android and iOS or a web dashboard. 98point6 offers two types of subscriptions: a personal plan and an employer-sponsored plan. (Individual insurance plans aren’t accepted as of yet.) The first subscription starts at $20 for the first year and $120 for the second year, and the second is available at a low or no cost to employees and dependents aged 18 and older.

Patients first fill out a profile with their personal information (identity and contact details), care preferences (pharmacy and preferred care provider), and coverage details. Next, 98point6’s chatbot-like Automated Assistant solicits health questions and information about their symptoms, all of which it relays to licensed, board-certified medical professionals.

“On average, half of the medical interview in the platform is conducted by an Automated Assistant,” Cape explained. “Natural Language Processing (NLP) is … leveraged to enable the patients to express their complaint in plain English even when they are conversing with the Automated Assistant. They can express themselves tersely or verbosely; in some cases, we get several words from the patient (‘my head hurts’), and in others we get multiple paragraphs. This helps create a natural dialogue, even in the context of a machine/human interaction.”

98point6’s use of AI extends beyond NLP. The platform learns from each visit, he said, becoming more efficient each time it’s used.

“The NLP is able to process this natural text and then the AI kicks in to determine the most relevant information to gather from the patient, also in a natural dialogue format,” Cape said. “The Automated Assistant is trained by artificial intelligence techniques, enabling it to not only ask the most relevant questions, but also ensure that the physicians are presented with the most material insight related to each patient’s articulated complaint.”

Currently, 98point6 services 40 states, including Alabama, California, Florida, Georgia, Michigan, New York, Pennsylvania, and Wisconsin, and Cape expects it to be nationwide by the end of the year. It’s been a slow but steady rollout since 2015. Because each jurisdiction has its own telemedical regulations, and federal regulations prohibit for-profit companies from practicing medicine directly, 98point6 has to set up subsidiaries in each state that comply with local laws. 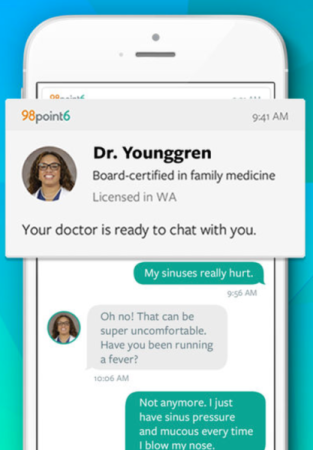 98point6’s terms of service make clear that it’s not intended to replace an emergency room or primary care physician — and that humans, not AI, are behind diagnoses. Its more than 15 full-time doctors — all of whom are based in the company’s Seattle headquarters — treat conditions that don’t necessarily require a trip to the office, namely acne, allergies, asthma, back problems, cold sores, eye infections, sunburns, and sexually transmitted diseases.

This type of service could help address the dearth of new health workers in the U.S., Cape said. The Association of American Medical Colleges forecasts a shortage of up to 49,300 primary care physicians by 2030, and 98point6’s research found that adding just one clinician to a population of 10,000 people would reduce the group’s mortality rate by 5.3 percent.

During beta testing, 98point6 achieved a 93 percent resolution rate. Its goal is to reduce wait times to 30 seconds or less.

“98point6 physicians are able to care for more patients than any other physician,” Cape said. “Even as 98point6 automates, a board-certified physician ultimately needs to make diagnoses and treatment decisions.”

Naturally, 98point6 isn’t the first to attempt virtual doctor’s visits at scale. Well-funded startups like Heal, Pager, and Doctor on Demand are just a few in the increasingly competitive telemedicine space, which Transparency Market Research forecasts will be worth $19.5 billion by 2025.

The real trick will be convincing folks to pick up their smartphone instead of driving to the doctor’s office. More than 70 percent of consumers say they’re interested in virtual health care, according to an Accenture poll, but only 20 percent have tried it.