Two flavors of high-speed 5G cellular service are about to become available — home broadband and mobile — but a new 1,000-consumer survey by consulting firm PwC suggests that carriers will need more than faster service to win customers over to the technology. As of September 2018, PwC found that only 46 percent of surveyed consumers were familiar with 5G, and concluded that high satisfaction with existing internet services will make selling 5G somewhat challenging.

The survey’s key takeaway is that many consumers are currently dissatisfied with the reliability of their home and mobile services. Around 40 percent of responding users complained of unreliable service, and roughly one-third said that reliability was a “must-have” for internet access. Performance drops were a stronger concern than any other factor, though security, speed, and cost efficiency each came up as important.

While the largest numbers of home (49 percent) and mobile (63 percent) users said faster speeds might justify a price premium, the survey suggests that they’re not willing to pay much more for 5G. One reason: Customers don’t feel they’re getting all the performance they’re already paying for. 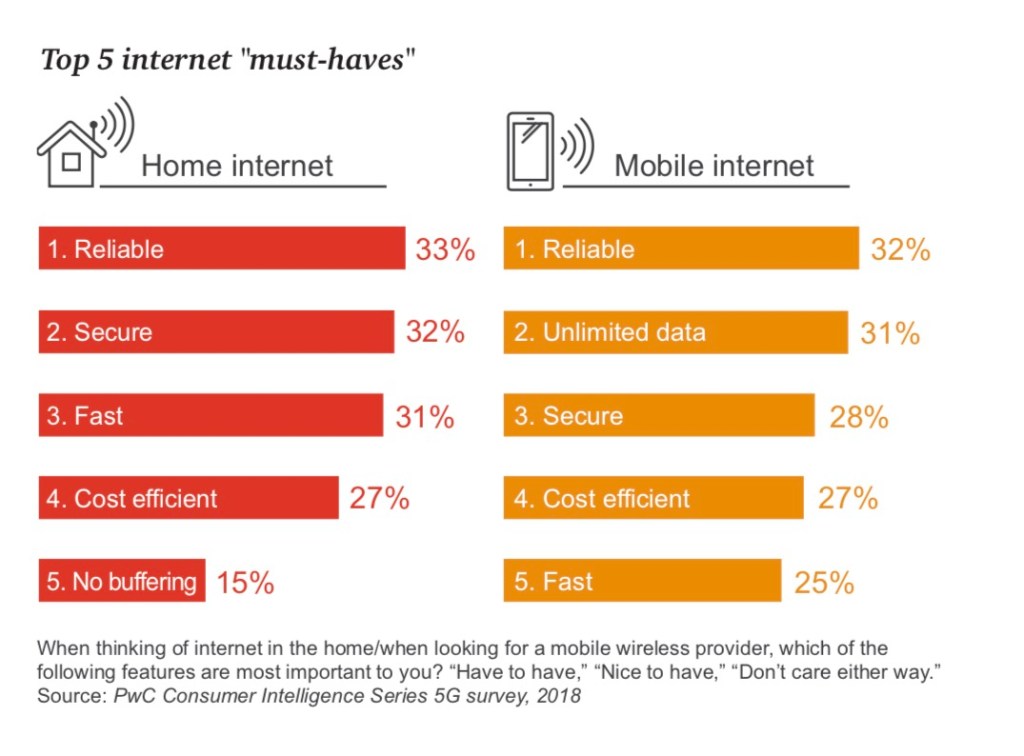 Assuming that 5G delivers on its promise of faster speeds, around a third of customers indicated that they’d be willing to pay $5.06 more per month on average, versus $4.40 more per month for mobile customers. But a majority of mobile customers would expect “true and consistent unlimited data” as a component of 5G service, while around a third of home users would only switch for something more than they currently get — service portability, improved reliability, or consistent coverage in a house.

Additionally, only 26 percent of respondents said they would buy a new 5G device as soon as it’s available — young men, African Americans, and video gamers were most likely to adopt 5G early. The other 74 percent said they will wait until they’re eligible for an upgrade.

Unsurprisingly, there’s a nontrivial gap between users under and above the age of 40. Younger users are more interested in 5G and willing to pay for it, while older users are more likely to be dissatisfied by the cost and reliability of their existing service, yet unwilling to pay more for either home or mobile service. The gap isn’t huge — 37 percent of under-40s are willing to pay more for home 5G, versus 29 percent of respondents 40 and over — but it’s clear that a one-size-fits-all 5G offering won’t likely satisfy most consumers, unless it’s inexpensive and excellent.

Since that’s unlikely, PwC offers some clear demographic targets who are more likely to be interested in 5G than others. Over two-thirds of customers expressing interest fell into one or more of the following categories: African American or Hispanic, 18 to 24 years of age, $75,000+ annual income, and urban geography. The further one gets from these demographic groups, the more interest in 5G is likely to taper off.

PwC offers the following recommendation for companies interested in offering 5G services: act strategically and plan for a prolonged rollout, focusing on the “most impactful geographic areas” while developing hooks to accelerate 5G adoption. The firm expects that providers will need to “up their game” to monetize more effectively, and they will have to be realistic about the fact that consumers have proved unwilling to cough up additional fees to connect devices other than phones — only 28 percent have done so for tablets. Winning over customers will take more than just fast, reliable service, but that’s a good place to start.