Energy waste is more common than you might think. Incandescent light bulbs consume 20 percent to 80 percent more electricity than energy-efficient alternatives like halogen incandescents, compact fluorescent lamps (CFLs), and light-emitting diodes (LEDs). The average dishwasher requires a whopping 1,800 watts of electricity to run. And according to a study of Northern California by the Natural Resources Defense Council, plugged-in devices that are “off” or in standby mode can use the equivalent of 50 large power plants’ worth of electricity in a year.

That’s why Hasty Granbery, former director of software engineering at PayPal, founded Currant in 2015, a Palo Alto startup devoted to creating smart home devices that reduce energy consumption. It today debuted its first AI-powered product — the Currant Smart Outlet — and announced a $7 million seed funding round led by Uncork Capital and K9 Ventures, with participation from UP2398, Precursor Ventures, and other undisclosed investors.

The Smart Outlet is certainly a looker. Bould Design — the team behind the Nest thermostat — spearheaded the design, which features a reflective surface, two independently controlled outlets, and a plate that can switch directions to keep cords out of the way. It has the highest safety ratings of any smart outlet, according to Currant, and each unit is calibrated using high-precision test equipment.

There’s more to it under the hood. The Smart Outlet records usage stats and beams them to a companion smartphone app (on Android and iOS) for AI-driven analysis, graphing power usage in real time (organized by hour, day, month, and year) and providing personalized energy-saving recommendations. For example, it might suggest cutting power to a set-top box when the TV isn’t on. 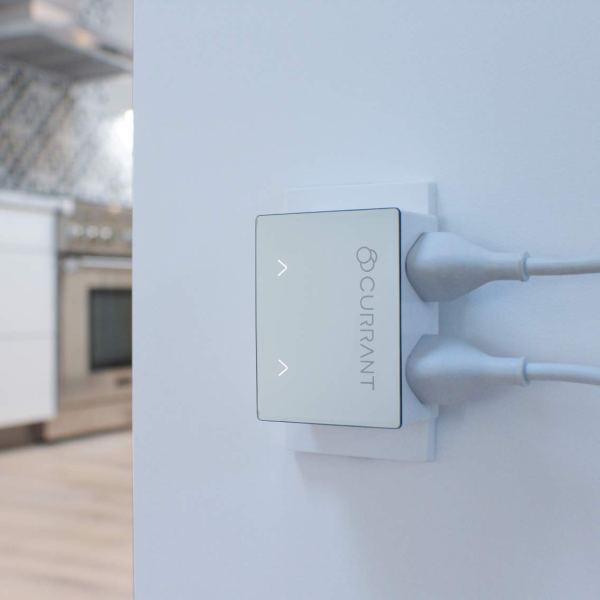 There’s no complicated setup or configuration involved — the app detects plugged-in devices and the Smart Outlet automatically, and enables users to set outlet-specific rules that toggle the power on a schedule. It can be monitored and controlled remotely, beyond the confines of home Wi-Fi. And it works with Amazon’s Alexa voice assistant and Google Home — simple voice commands switch the Smart Outlet on or off.

Currant isn’t the first to drive power insights with AI. Products like Smappee operate at the fuse box level, recording the unique electronic signature of devices plugged into every outlet. But Granbery contends that the Smart Outlet is more accurate, because it can detect appliances that draw a low amount of power over long periods of time.

“Millions of people grossly underestimate the effect plugged-in but inactive devices have on their power bills,” he said. “Currant tackles this issue by analyzing usage patterns and suggesting simple, customized changes to automatically power off unnecessary devices and cut energy consumption.”

The Bluetooth and Wi-Fi variants of the Smart Outlet start at $49 and $59, respectively, and are available today from Amazon and at Currant.com.