Like the #MeToo hashtag expressed the pervasiveness of sexual violence against women, the lack of women on many panels has been expressed in social media with the #manel hashtag. Manel became commonly used enough that the Oxford Dictionary considered adding it last year.

Released today, the Gender Diversity & Inclusion in Events Report was compiled using facial recognition software that went through images including more than 60,000 speakers at professional events in 23 countries.

Among 23 industries included in the survey, education (44 percent), marketing and advertising (39 percent), and human resources (39 percent) had the highest rates of women speakers.

By event type, conferences and conventions were further from gender parity than things like fundraisers and galas. 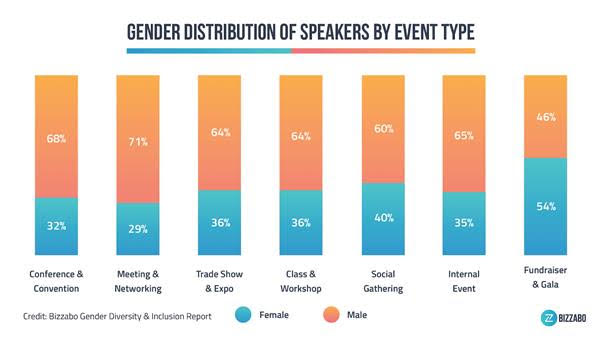 Before the rise of the #manel hashtag, since 2015 the All Male Panel Tumblr page has documented all-male panels. Submissions from around the world are posted along with a David Hasselhoff thumbs-up sticker.