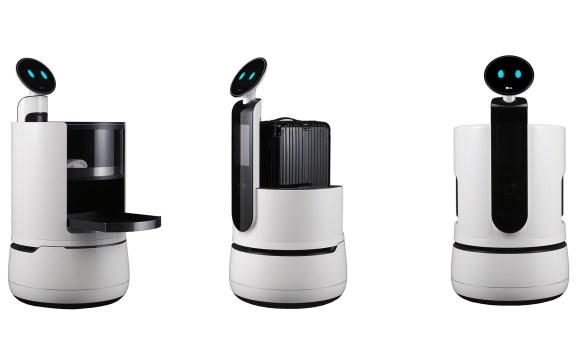 Need assistance with your groceries? In the future, a robot might extend you a helping hand — if LG has its way, that is. Today, the electronics giant announced a partnership with E-mart, a South Korean retail chain, to develop a “new type of service robot” that can point customers in the direction of promotions, follow them as they browse aisles, and even push their shopping carts for them.

The new robot — which will join LG’s existing CLOi lineup of eight robots, according to Yonhap News — will be able to avoid obstacles as it moves around store floors. As of publication time, it’s unclear how many of the forthcoming robots will join E-mart’s human store clerks and restockers and exactly where they’ll be deployed once development wraps up; E-mart has 160 stores in South Korea and several in China.

We’ve reached out to LG for comment and will update this article when we hear back.

LG has been involved in robotics for the better part of two decades, but in recent years it has substantially diversified its investments. The Seoul-based company claims that over the past year, it has devoted more than $90 million to its collective “autonomous machines.”

In October, LG teamed up with hobbyist robotics startup Robotis to develop a “self-driving module” for mobile robots. As part of the arrangement, the two companies will contribute software and hardware for robots equipped with “intelligent navigation technologies,” and LG will expand its robot product portfolio “[in] close cooperation” with manufacturer Robotis, which is perhaps best known for its modular, open source humanoid robotics kits.

And LG has expanded its in-house robot portfolio.

There’s LG Hom-Bot, a robot vacuum cleaner that uses computer vision to navigate around furniture and other objects in its way, and the CLOi SuitBot, an exoskeleton designed to “support and enhance a user’s legs to allow for more mobility and lower limb strength.” Moreover, at the 2018 Consumer Electronics Show in January, LG took the wraps off of three concept robots under its CLOi brand: a server robot that delivers food and drinks, a porter robot that handles check-in and check-out at hotels (plus lobby-to-room luggage transport), and a grocer robot that informs customers of specials and guides them through store aisles.

One of the company’s largest-scale robot deployments is at Incheon International Airport in Seoul, South Korea, where a fleet of LG custodial robots scan boarding passes, provide directions, and tidy up areas in need of cleaning. They can converse with passengers in four languages — Korean, English, Chinese, and Japanese — thanks to the company’s in-house voice recognition platform.

“Incheon is one of the busiest airports in the world,” Dr. I.P. Park, LG’s chief technology officer, told VentureBeat in an interview earlier this year. “Imagine a robot navigating that complex environment without interfering with or bumping into passengers. Thanks to our AI platform, it can move around on its own with full autonomy … Our goal is to utilize AI and innovative software technologies to help our customers have the best experience possible.”

More broadly, LG has devoted increasing resources to artificial intelligence (AI) research. In June 2017, it opened a lab in South Korea with the goal of bringing its research in computer vision, voice recognition, and natural language processing under one roof. And in August, it opened an AI R&D lab in Toronto, Canada — its second in North America — and named the University of Toronto the beneficiary of a “multi-million-dollar” AI investment fund.