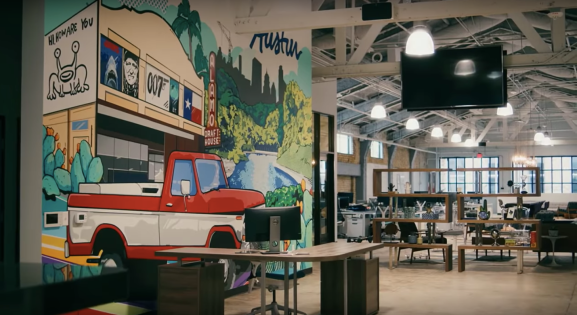 Called 4.co, the project will involve engineers from both companies working side by side to develop new internal applications that utilize Microsoft Azure, as well as migrating existing operations to the cloud.

“The exciting part of working with Walmart is sort of the massive breadth of experience and operational programs they have in front of them,” Corey Sanders, corporate vice president for Microsoft Azure, told VentureBeat in a phone interview.

When the office opens in early 2019, it’s expected to house a combined 30 engineers from Walmart and Microsoft. Walmart already has an “emerging technologies” office in Austin with about 50 employees, and the 4.co office will go in the the same building.

Since announcing their strategic partnership in July, Microsoft and Walmart have offered few details. While neither company has said explicitly that they joined forces to take on Amazon, the venture is clearly aimed at one of Amazon’s largest revenue streams — enterprise cloud services.

Walmart chief information officer Clay Johnson told VentureBeat in a phone interview that since the partnership was announced, the two companies have been working on building internal chatbots, starting with a chatbot for associates to ask questions about their benefits packages, using Cortana’s framework.

With Microsoft’s help, Walmart has also installed internet of things sensors in the refrigeration and freezer systems in most of its more than 5,000 U.S. stores. If the sensors detect the temperature dropping below a certain level, Walmart’s systems automatically create a ticket to get the refrigeration system in that store fixed.

“That’s a lot of food spoilage across the U.S. if you have 5,000 stores,” Johnson told VentureBeat. “You can imagine that [when] anything goes wrong [with] a freezer anywhere … if [the store] can’t react to it quick enough or [employees] don’t realize it’s happening, they have to shut it down, take all the food out, and move it.”

Both Sanders and Johnson said it became clear during the first few months of the partnership that having engineers in the same office would accelerate the cloud migration work. Still, putting engineers from two different companies in the same office is highly unusual, and there doesn’t appear to be any precedent for this type of partnership among companies of Walmart and Microsoft’s size.

In addition to its Austin office, Walmart recently opened a machine learning and computer vision office in Dallas and announced earlier this year that it planned to hire more than 2,000 technologists by the end of 2018, with many of those positions allotted for its Bentonville, Arkansas headquarters.

Sanders and Johnson declined to say how many employees they expect the joint office to add in the coming years, saying it’s still early days for the venture.