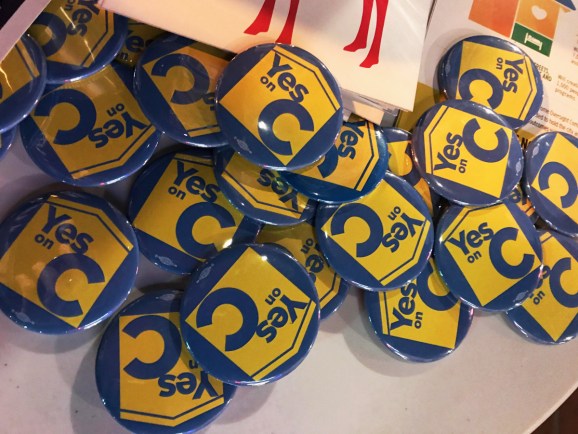 San Francisco voters appear to have ratified Proposition C, an initiative to increase taxes on businesses earning more than $50 million in gross annual receipts in order to provide services for homeless people.

With 100 percent of precincts reporting, 59.9 percent of ballots cast voted yes on C while 40.1 percent voted no, according to the San Francisco County Department of Elections website. Just 50 percent plus one vote is needed for the proposition to pass, however since the measure did not reach 66 percent in yes votes could face legal challenges.

The battle over the funding of services for homeless people pitted Prop C supporter and Salesforce CEO Mark Benioff against billionaire CEOs from companies like Stripe and Square.

Benioff put about $8 million in personal and company money into the Yes on C effort to supply the majority of pro Prop C funding, while Dorsey, a billionaire, gave $125,000 to the No on C effort. Stripe also put $419,000 toward the Prop C opposition campaign.

Proposition C will provide up to $300 million to supply homeless people with permanent housing and mental health services and to support families at risk of becoming homeless.

The San Francisco 2017 Homeless Count & Survey found that the city has a homeless population of about 7,000 people.

In the lead-up to the election, Benioff had public spats with No on C supporters like Zynga cofounder Mark Pincus and Twitter and Square CEO Jack Dorsey.

Stripe CEO Patrick Collison has called the measure the city’s largest ever tax increase and claimed it lacks accountability.

The proposition also pitted Benioff against city leaders like mayor London Breed, who ran in part based on her promise to improve the lives of homeless people in San Francisco. Both Collison and Dorsey said they trust Breed’s plan to address homelessness over the proposed tax.

With 70 billionaires, the San Francisco Bay Area has the third-highest number of billionaires of any metropolitan area in the world, after Hong Kong and New York, according to a report from data company Wealth-X from earlier this year.

Updated 3:39 p.m. to acknowledge that Prop C could still face legal challenge and to update “With 99 percent of precincts reporting” to 100 percent.