Want one-tap access to Amazon’s Alexa on your PC? Starting today, it’s as easy as installing the new Alexa app.

Amazon today announced that the Alexa for PC app is broadly available for Windows 10 devices through the Windows Store in the U.S., U.K., and Germany, with additional markets to come in 2019. Previously, it came preinstalled on select PCs from manufacturers.

“With Alexa for PC, customers have access to thousands of the same capabilities they already love about Alexa,” an Amazon spokesperson told VentureBeat via email. “No additional hardware is required, allowing anyone with a compatible device to experience Alexa. Just tap-to-talk to control smart home devices, ask questions, set timers and alarms, manage your calendar … and more.”

Alexa for PC also provides access to the more than 50,000 third-party skills available from the Alexa Skills Store. (Messaging and music services like Spotify and Pandora, however, aren’t yet supported.). It uses Microsoft’s Fluent Design elements, like acrylic panels, and works with Windows 10’s dark mode. 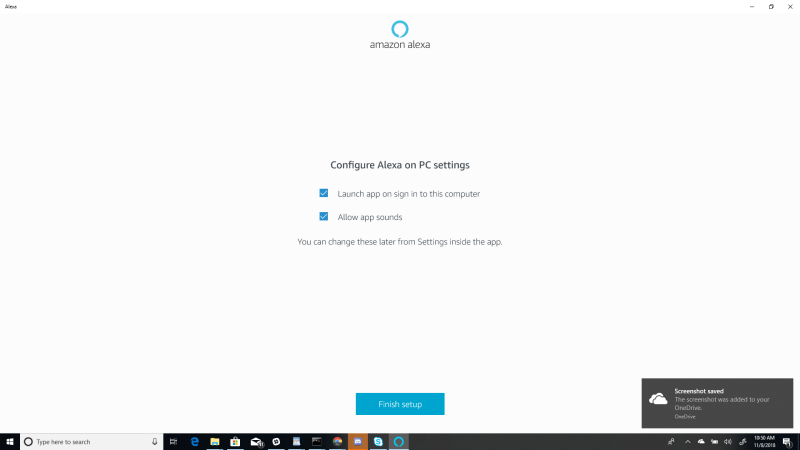 The Alexa for PC app isn’t a hands-free affair, strictly speaking. Unless you have a PC “acoustically tuned specifically for Alexa” like the Acer Spin 5, Acer Aspire 5, or HP Envy, invoking Amazon’s assistant requires clicking a button within the app or using a keyboard shortcut. That said, you don’t need additional hardware for baseline functionality — it uses the microphones and speakers built into your PC or webcam.

We’ve reached out to Amazon for clarification on hardware compatibility and will update this article once we hear back.

Amazon said that early next year, it’ll be rolling out “additional capabilities” that allow users to interact with PCs.

“Alexa is always getting smarter, so you can expect ongoing updates on top of those as well,” a spokesperson said.

The Amazon for PC app’s rollout comes months after Microsoft and Amazon launched an Alexa-Cortana public preview for Echo speakers and Windows 10 PCs. As part of the integration, users can say “Hey Cortana, open Alexa” to summon Alexa on Windows 10 PCs or “Alexa, open Cortana” to pull up Cortana on a range of Echo smart speakers.

“The world is big and so multifaceted,” Amazon CEO Jeff Bezos said of the partnership in August 2017. “There are going to be multiple successful intelligent agents, each with access to different sets of data and with different specialized skill areas. Together, their strengths will complement each other and provide customers with a richer and even more helpful experience.”