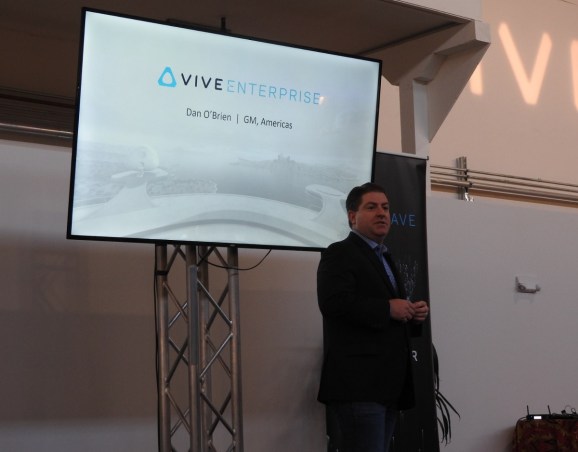 HTC said it will make the Vive Focus standalone virtual reality headset available in North America and dozens of other markets.

The move is part of an expansion aimed at taking VR into enterprise markets, where customers aren’t as sensitive to higher hardware prices. Previously, the headset was available only in China.

Dan O’Brien, general manager of the Americas for HTC Vive, said at an event in San Francisco that the Vive Focus will be available for developers at $600, and the enterprises can buy the product for $750 in 37 new markets, including the U.S. and Europe.

Hugo Swart, senior director of product management at Qualcomm Technologies, said mobile XR (extended reality) can drive technology in the enterprise. He said the standalone category, which sits between smartphones and PCs, fits nicely in the enterprise, with advantages such as wireless and two-hand controller experiences.

“Enterprises are using VR to collaborate and engage with a complete solution,” said O’Brien.

He said enterprises are already using VR to train thousands of people in everything from manufacturing to medical enterprises. In the past, the Vive Focus was available in China and other limited markets.

The Vive Focus isn’t quite as powerful as the HTC Vive Pro or HTC Vive, which both use PCs for processing. The Vive Focus, however, does not need to be attached to a PC, as it has its own Qualcomm Snapdragon 835 processor as its brain. It has three hours of battery life and a screen resolution of 1,440 x 1,600 pixels per eye. It also has inside-out tracking, meaning it does not need separate sensors to be put up around your room.

“We felt collaboration in a professional environment was an unsolved category,” O’Brien said.

Vive Sync is a workforce collaboration tool targeted at this market. You can mark up shared documents and store them for future use. As many as 20 people can be in the same VR space.

“Vive Sync offers us the ability to meet in groups in virtual reality,” he said.

The device will use HTC’s Viveport as its single store, with apps available for multiple kinds of headsets from different vendors. For example, Shadow Creator’s Shadow VR head-mounted display will work with the Vive Wave platform, meaning it is Vive compatible, and apps for it are available in the Viveport store.