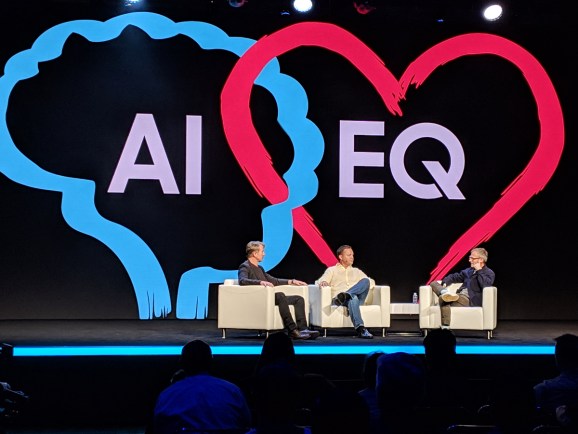 Viv Labs CEO Dag Kittlaus and "Her" director Spike Jones speak with Samsung ____ at the Samsung Developer Conference held at the Moscone Center on Nov. 8, 2018 in San Francisco, California

Viv Labs CEO Dag Kittlaus envisions a day when appliances speak to you as soon as you take them out of a box, are aware of your preferences, can talk you through a tutorial, and can build an emotional bond.

Kittlaus and Viv Labs cofounder Adam Cheyer, both co-creators of Apple’s Siri, debuted the Bixby Developer Studio for creating voice apps with Bixby, an AI assistant that will learn how to speak five new languages next year.

Viv Labs technology fuels Bixby 2.0, which was introduced last year and enhances the assistant’s natural language abilities and can deep-link with a variety of services.

“I have a vision — and I think a lot of us here at Samsung share this vision — where it’s not just about buying a cool, shiny object anymore. I can imagine a day where every time you buy a Samsung product, you literally take it out of the box, plug it in, authenticate yourself somehow and it says, ‘Hi Spike, how’s it going today? I just downloaded your favorite preferences. Do you have any questions on how to use me?'” Kittlaus said onstage at the Samsung Developer Conference.

Kittlaus spoke with Her director Spike Jonze and Samsung CMO Marc Mathieu onstage Thursday during a keynote address on day two of the conference.

It’s one thing for a run of the mill smart home appliance manufacturer to share such a vision, but it’s quite another coming from Samsung, a company that ships 500 million televisions, dishwashers, and other devices a year and is one of the biggest manufacturers on Earth.

Samsung has committed to making all of its products connected and intelligent by 2020.

“It knows you, and that is sort of the first step toward moving from ‘Wow, this is a really cool, shiny, new device’ to creating an emotional relationship with a brand or a company that has gone so far as to take these ideas and really turn them into products, where it just makes you feel good when you pull it out of the box. And it knows you, and it knows your past, and can help you,” he said.

In Her, an AI assistant named Samantha — voiced by Scarlett Johansson — forms a deep emotional bond with a lonely male character played by Joaquin Phoenix.

Kittlaus thanked Jonze for making Her and said its contribution to the imaginations of conversation experience designers is akin to that of Hal 9000 from Space Odyssey: 2001 and Kitt from Knight Rider. He also repeatedly implored developers making conversational experiences for Bixby (called capsules) to appeal to users’ humanity.

“This now sets a new bar for what we’re talking about, so I’m appreciative of that, because it’s brought to life something that we have to really actually think about as we’re building the future,” Jonze said.

Her wasn’t made with technology in mind, Jonze said. Instead, he was thinking about human needs, like people’s longing for intimacy and fear of revealing themselves.

Jonze said he believes it’s necessary for the people making voice assistants to recognize what makes them feel more or less connected, something Kittlaus also urged developers making capsules for Bixby to consider.

Doing so will allow Samsung to leapfrog its competitors in the space, he said.

“There’s lessons learned here over and over and in many different contexts that [you need to give] it a little bit of personality, have thoughtful process around it as you’re developing things for Bixby, for example, make it a little more human. Because you know what? It’s going to be more well-received. There’s plenty of evidence all over the place that just the human touch creates that connection, and that inherently will increase engagement people have with the product,” he said.

Kittlaus joins a chorus of voices emphasizing that context-specific and emotionally intelligent experiences are key to creating a deeper connection.

Ashwin Ram, the technical director of AI at Google Cloud and former head of the Alexa Prize at Amazon, suggested assistants that can maintain a conversation could be an antidote to the loneliness epidemic that claims too many lives in modern society.

Assistant connection also came up last month at VentureBeat’s VB Summit, where eBay VP of applied research and machine learning Alexander Stojanovic asserted that the future belongs to companies that can make the deepest connection with users, and Amazon VP Mariam Daniel said Alexa has an ESTJ personality on the Meyers-Briggs scale.