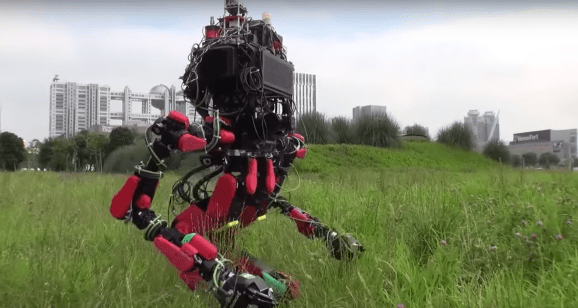 This morning, Google parent company Alphabet confirmed to Nikkei its intention to shut down Schaft, a Japanese robotics team it acquired in 2013. The move comes just over a year after Google’s sale of Massachusetts startup Boston Dynamics, which specialized in highly articulated utility robots, to Softbank. (Softbank was also set to acquire Schaft’s team and assets this year as part of a deal struck in June 2017, but reneged on its offer.)

It’s history repeating itself — and yet another blow to Alphabet’s atrophying robotics business. So what went wrong this time?

Schaft’s failures certainly weren’t technical in nature. The University of Tokyo robotics lab spinout was at the forefront of bipedal robotics research — in 2013, it won the U.S. Defense Advanced Research Projects Agency’s Robotics Challenge, which aims to develop semi-autonomous robots that can perform complex tasks in dangerous environments. Moreover, it claimed to have pioneered actuators — the components of a robot responsible for moving and controlling mechanical limbs — that were “10 times” more powerful than competing designs.

An unclear path to market appears to have played a role.

In 2015, Google acquired nearly 10 companies as part of its Replicant initiative, which sought to create a consumer robot technology by 2020. Replicant was an independent division within Alphabet headed by Android cofounder and co-creator Andy Rubin until his departure in 2014. And prior to Replicant’s formation, Alphabet spent an estimated $50 million to $90 million on eight autonomous machines acquisitions before the end of 2013 (nine of which Rubin led).

Rubin’s exit destabilized the disparate divisions, according to Business Insider, paving the way for the robotics divisions’ consolidation within Alphabet’s experimental X lab — and harmful cost-cutting. In 2015, as part of a restructuring plan laid out by Ruth Porat, Alphabet’s chief financial officer, Boson Dynamics slimmed down its experimental efforts, while its engineers sought to identify a specific, real-world problem and business model under threat of reassignment.

“The technology pieces we have are incredible,” a member of Google’s robots team told Business Insider at the time. “We just have to commit to a particular direction to go in and focus.”

Their efforts ultimately proved unsuccessful. Google executives put Boston Dynamics on the chopping block because it was unlikely to produce a marketable product in the next several years, according to Bloomberg, and Schaft seems to have suffered its untimely end for the same reason. TechCrunch reports that Google’s current robotics research is inclining toward “non-humanoid robots” and “industry-led solutions, such as robotic arms.”

Could that be the key to Alphabet’s robotics dilemma? Perhaps. But one thing’s certain: Its competitors have a significant head start.

Amazon’s $775 million purchase of Kiva Systems in 2012 has by all accounts paid dividends, enabling the retail giant to improve the efficiency and speed of its warehouses. Microsoft has eschewed hardware thus far but has invested heavily in its Aerial and Informatics and Robotics (AIR) group, which is charged with “building intelligent and autonomous flying agents that are safe and enable applications that can positively influence our society.” The company has also worked to integrate support for open source development tools like Robot Operating System (ROS) into Windows 10. Facebook, meanwhile, recently hired Carnegie Mellon professor Jessica Hodgins, who now leads the company’s Pittsburgh AI research lab focused in part on robotics.

That’s all to say that if Alphabet hopes to make inroads in an industry forecast to be worth $79 billion by 2022, it’d better hop to it.