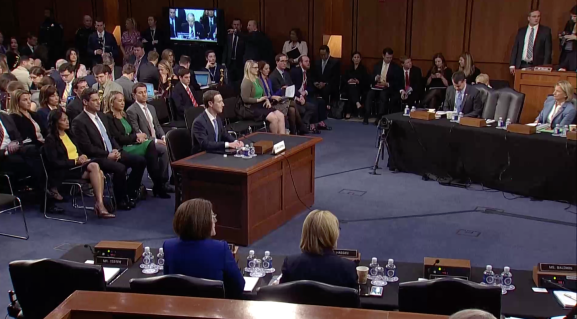 Mark Zuckerberg testifies in front of the Senate Judiciary and Commerce Committees on April 10, 2018.

Facebook CEO Mark Zuckerberg said on a conference call with reporters that the company will be creating an “independent body” that users can appeal content moderation decisions to.

Zuckerberg has previously floated the idea of creating a “social media supreme court,” but now the company is taking concrete steps to make this actually happen. In a note detailing his vision more, Zuckerberg said that he didn’t want to concentrate too much decision power in the hands of Facebook:

In the next year, we’re planning to create a new way for people to appeal content decisions to an independent body, whose decisions would be transparent and binding. The purpose of this body would be to uphold the principle of giving people a voice while also recognizing the reality of keeping people safe.
I believe independence is important for a few reasons. First, it will prevent the concentration of too much decision-making within our teams. Second, it will create accountability and oversight. Third, it will provide assurance that these decisions are made in the best interests of our community and not for commercial reasons.
This is an incredibly important undertaking — and we’re still in the early stages of defining how this will work in practice. Starting today, we’re beginning a consultation period to address the hardest questions, such as: how are members of the body selected? How do we ensure their independence from Facebook, but also their commitment to the principles they must uphold? How do people petition this body? How does the body pick which cases to hear from potentially millions of requests? As part of this consultation period, we will begin piloting these ideas in different regions of the world in the first half of 2019, with the aim of establishing this independent body by the end of the year.

In a conference call with reporters, Zuckerberg said that Facebook’s content moderation teams and tech systems will still handle the first part of the process — deciding what type of content to take down, as well as taking on the first request for appeals. It would be subsequent appeals that would go to the “independent body.”

In response to a question about the type of people that Facebook will be looking to place on this independent board, Zuckerberg said that it would be looking for suggestions from academics, human rights experts, journalists, and other people who have studied issues like hate speech and free speech. Zuckerberg said that he wants the body to be independent, but given that Facebook’s financial priorities are heavily reliant on increasing its number of users and level engagement, it’s hard to imagine that there won’t be times when the independent panel and Facebook disagree.

“The challenge will be how to do the selection process for this body in a way that makes it independent, also upholding the principles of giving people a voice while also keeping people safe,” Zuckerberg said.