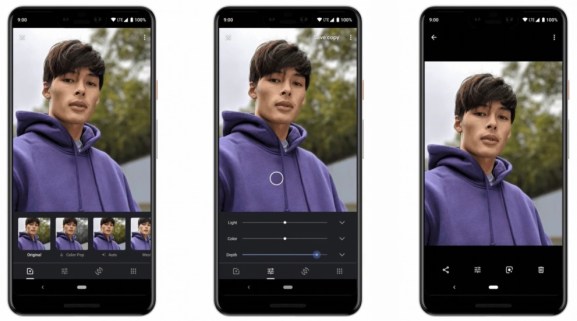 Over the past few years, smartphones have been using second lenses and computational photography tricks to create “portraits” with blurred backgrounds, but users haven’t had fine control over the blur effect. Having already brought depth editing to Android devices, Google Photos is getting an iOS update today to add the same feature to portrait photos snapped by iPhones and the latest iPad Pros.

The new feature will let users both adjust blur and select the preferred focus area for shots, using bokeh algorithms that produce potentially different results from Apple’s. To activate the feature, you’ll need to use the Google Photos app to select a portrait photo that’s been uploaded to Google’s servers, tap the editing icon, then tap on the sliders icon to reveal a Depth slider.

Google is also adding a “color pop” feature to the iOS app, enabling automatic desaturation to make a colored area in the image “pop.” As just one example, this can turn a background black and white while leaving a person’s clothing colorful, or vice versa.

The features were rolled out to Android users last month, with the Pixel 2, Pixel 3, and Moto G6 as specifically supported devices. Google says that the feature is available today in the iOS app, but it can’t be found in currently available version 4.6, and thus will likely be appearing later in the day.

Other companies have recently been experimenting with the depth data featured in iOS portrait photos as well. Apple added a live bokeh editing feature to the latest version of iOS, enabling real-time previewing and adjustment of the blurring effect, while Facebook debuted a 3D Photos feature that uses depth data to create images that can be viewed from different angles.

But only photos with depth data are supported. iOS Portrait Mode is supported by dual-lensed iPhones and the TrueDepth front cameras found on iPhone X-series phones and the latest iPad Pros.