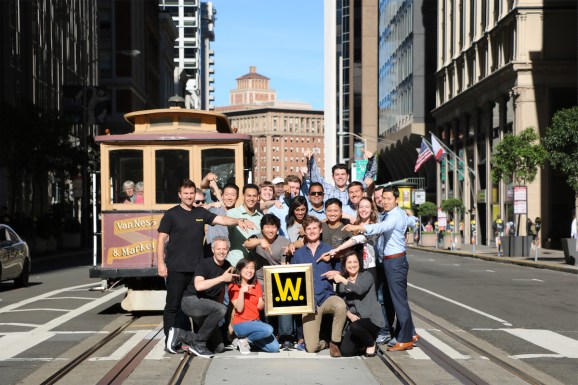 Wonolo, an app that helps companies find temporary workers and contractors, today announced that it has raised a $32 million round of venture capital, led by Bain’s venture capital arm. New investor DAG Ventures also participated in the round. Existing investors include Base10, Sequoia, PivotNorth and Tuesday Capital. This brings the total amount of funding raised by Wonolo to $60 million.

Wonolo is headquartered in San Francisco and was cofounded by former Coca-Cola employees, who now count their old employer as a customer, in addition to brands like Papa John’s and Uniqlo.

COO AJ Brustein told VentureBeat in a phone interview that he and his cofounders created Wonolo to make it easier for larger companies to find temporary staffers. Brustein said that the average time to fill a job on Wonolo is four minutes, compared to weeks or months for traditional staffing agencies.

People who are interested in taking a job on Wonolo, called “Wonoloers,” fill out a personality quiz, and the company conducts a background check on each one. The onboarding process takes about 20 minutes. Once someone is approved to use Wonolo, jobs are available on a first-come-first serve basis, though some specialized jobs are only open to those with specific skills or certifications.

After a job on Wonolo is completed, both the company and the worker rate their experience. That data feeds into Wonolo’s algorithms so that workers with some of the most positive ratings see jobs posted by companies with some of the best worker ratings. Wonolo makes money by charging companies a fee — starting at 45 percent of the Wonoloer’s pay. So for a worker who makes $100 for a job on Wonolo, the company could make $45 or more.

Brustein said that most of the jobs on Wonolo are in fulfillment, distribution, and logistics — particularly now, with the holiday season approaching. He said that jobs on Wonolo pay an average of “$14 an hour and some change,” though that can vary greatly depending on the location of the job, as well as whether it’s for an independent contractor or an hourly worker.

Brustein added that people looking for work on Wonolo often fall into one of three categories — the unemployed, the underemployed, and “the ones looking for flexible work.” It’s the underemployed that Brustein said Wonolo most caters to, especially as the U.S. labor market has gotten tighter, and unemployment is at a historic low.

“The government would label [the underemployed] as working 29 hours per week or less,” Brustein told VentureBeat. “We look at that a little bit differently, because when you talk to people who define themselves as underemployed, it’s a much larger basket — it could be anyone working full-time today but [who] still needs to pick up an extra shift to earn more money.”

One of the services Wonolo touts to companies is assistance in tweaking job descriptions in order to fill them more quickly. These adjustments are based on data Wonolo has about what types of jobs workers rate most positively. Brustein said that in order to better cater to this group of underemployed workers, Wonolo suggests companies be more willing to rely on multiple people to fill, say, a two-week shift. Brustein said that companies advertising themselves as having food on site and being close access to public transportation also typically do better.

“Some companies, especially ones that are new to this flexibility and are used to having a lot of control over their workers and their schedule … we’ll help coach them and help them understand ‘Hey, maybe you’ll find AJ and AJ’s going to be great, but AJ can only work Thursday and Friday, and it will be a benefit to you to have AJ working there, so you’ll just find someone to work Monday, Tuesday, and Wednesday’,” Brustein said.

While there are dominant apps for specific types of on-demand, independent labor, like Uber, Postmates, and TaskRabbit, there’s no market leader yet for a B2B platform for on-demand work. Chicago’s Shiftgig has racked up funding comparable to Wonolo’s, but both companies will also soon face a formidable competitor in Uber, which announced in October that it was testing its own on-demand staffing business, called UberWorks.

Brustein declined to give revenue specifics, only to say that Wonolo’s revenue “well more than doubled” over the past year. The company was founded in 2014 and has 70 employees, including 12 sales people in its recently established “second headquarters” in Nashville.