Chipolo. Tile. Protag. There’s practically a bottomless selection of Bluetooth trackers these days, and it’s no wonder. In the course of one year, Tile sold 2 million units of its original $25 smart tracker. And some analysts predict that by 2023 the Bluetooth tracker market will be worth $5.34 billion.

But not every startup’s growth has mirrored the wider upward trend line. Santa Barbara, California-based TrackR, which made an app and geolocating devices that helped users find keys, wallets, bags, and other essentials, in January laid off 42 members of its staff after raising $63 million from Amazon’s Alexa Fund, Docomo Capital, Foundry Group, and former AOL chief Steve Case’s Revolution Growth. Now, months after the restructuring, TrackR has undergone a rebranding — it’s been rechristened Adero — and moved away from smart trackers in favor of a platform it’s calling an “intelligent organization system.”

“Smart devices were supposed to make our lives better, but we’ve discovered over the past decade that connecting anything and everything possible to the internet is adding to our burden instead of alleviating it,” said Adero CEO Nate Kelly, who stepped in for TrackR cofounder Chris Herbert earlier this year. “More apps to manage, more devices to keep an eye on, more cords to untangle — it’s too much.”

Adero’s two-part system comprises smart tags and “taglets.” The former adhere to bags, carry-on bags, backpacks, gym bags, and containers, while the latter stick to items stowed inside of those packs, such as wipes, headphones, laptops, and passports. The smart tags communicate with taglets and alert users through Adero’s smartphone app (currently for Android, with iOS support forthcoming) via a notification when they accidentally leave something important behind. 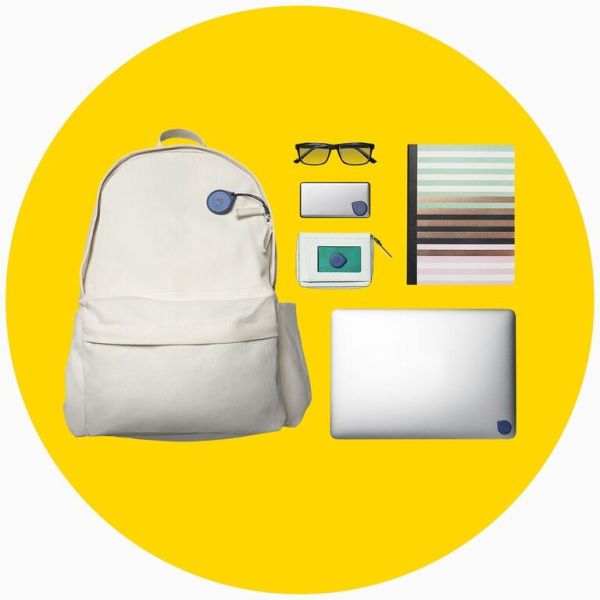 “Adero is giving your essentials awareness and intelligence to keep track of themselves so you don’t have to,” Kelly said.

It’s more sophisticated than it sounds. Within the aforementioned app, folks can schedule reminders to pack a valuable or grab a bag on certain days of the week and can create a “smart container” for groups of taglet-tagged things that go together (for instance, keys and a wallet).

Taglets and smart tags are fairly capable in their own right. Smart tags sport a button that, when pushed, switches on an embedded LED light that glows red if a bag’s missing something and green if everything’s present and accounted for. They have rechargeable batteries that last up to two months. And both smart tags and taglets are water-resistant, while taglets are waterproof.

Adero’s locating platform certainly sounds compelling, but $120 is a steep price of entry, considering that three of TIle’s recently launched Tile Pros can be had for $105. The Tile Pro also has the advantage of a longer-lasting battery (with a quoted 12-month battery life), and it offers a comparable reminder feature — Smart Alerts — that triggers a notification and text message when users leave it behind in a geofenced area.

There’s no question that Adero is at a market disadvantage compared to competitors, some of which have inked deals with partners to build their tech into third-party devices. Tile, for example, has or is working on products with Comcast, Herschel, Bose, and Blunt Umbrellas and claims that it’s sold more than 15 million devices to date, accounting for 95 percent of the market in the U.S.

But Kelly contends that Adero’s family of products satisfies an as-yet unaddressed consumer demand: smart trackers that “know” everything that’s inside a bag or carrying case — and everything that isn’t. He cited studies suggesting that up to 47 percent of people regularly leave home having forgotten something essential, and 66 percent of people with children — one of Adero’s target demographics — lose things on a daily basis.

“We’re transferring the anxiety from you to our system of tags, effectively telling them to ‘take care of this bag’ and ‘take care of the essentials in this bag’, freeing your mind to focus on what matters most,” Kelly said.

It doesn’t hurt that Adero brought in $10 million in a funding round this July, giving it the capital it needs to roll out its new lineup.