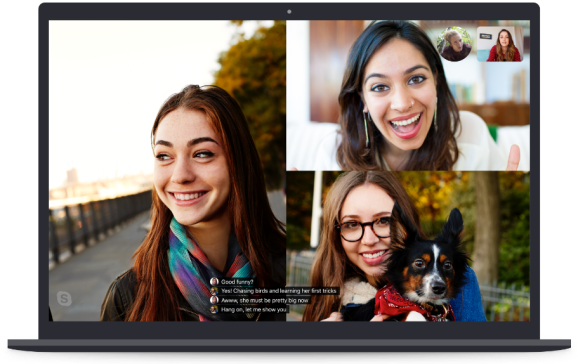 Real-time captions and subtitles are heading to PowerPoint and Skype, the company today revealed in a pair of announcements timed to coincide with the United Nations International Day of Persons with Disabilities  (UN IDPD).

“The word ‘empower’ means a lot to every Microsoft employee, it’s a key word in our mission ‘to empower every person on the planet to achieve more’, including the [more than a billion people] with disabilities,” Jenny Lay-Flurrie, chief accessibility officer at Microsoft, wrote in a blog post. “So, this year has special meaning to us and want to share some new features, and programs that we hope empower a more inclusive, diverse, and productive world.”

Starting this week, PowerPoint captioning and subtitling features, which were previously available through the Presentation Translator add-in, will begin migrating to PowerPoint proper with support for 12 spoken languages and 60 text languages. They’re customizable — captions and subtitles can be displayed in the same language or a different one, or adjusted in position, size, and appearance — and automatically adapt based on the presented context to improve the recognition of names and terminology.

Live captions and subtitles will begin rolling out in late January 2019 and will be available for Office 365 subscribers for PowerPoint on Windows 10, PowerPoint for Mac, and PowerPoint Online. In the meantime, the Presentation Translator add-on isn’t being deprecated, Microsoft says — it’ll remain available for those who choose to use it.

Many of those capabilities are now available on Skype for mobile (iOS and Android) and desktop, as well. Within the settings menu of the latest client versions, users can turn on captions and subtitles for a single call or keep them on for all calls, during which they’ll automatically scroll. Additional views are forthcoming, including a side window that will allow callers to scroll through captions and subtitles at their leisure.

Additionally, in the coming weeks, Skype will gain support for translations in over 20 dialects. During calls, subtitles will be automatically displayed in the language of users’ choosing.

Today’s debuts follow on the heels of a November update to Microsoft Stream, Microsoft’s corporate video-sharing service, that added facial detection to indicate who’s talking, speech-to-text and captions, and transcript search and timecodes, and they follow automated transcription and computer vision upgrades in August to OneDrive and SharePoint. In related news, Microsoft in July launched live events with facial recognition and speech-to-text transcripts in Microsoft Teams, Yammer, and Stream for Microsoft 365 customers.