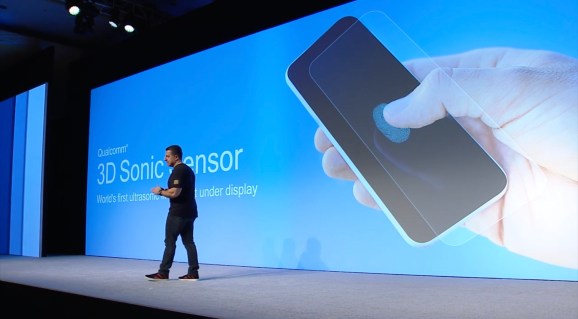 In-display fingerprint scanning was something of a holy grail for smartphone makers two years ago, but hiccups in making the technology actually work reliably led companies to use alternative solutions instead. Qualcomm kept working on the concept, though, and today announced the 3D Sonic Sensor — a solution it calls “the world’s first under-display ultrasonic fingerprint scanner” — with a major splash planned for 2019.

As its name suggests, the 3D Sonic Sensor’s key innovation is a fingerprint reader that uses sonic rather than optical scanning technology to record and match fingerprints. Qualcomm notes that the ultrasonic scan images the ridges and details of fingers in three dimensions, and is able to “see” through contaminants such as water, oil, grime, and debris to provide an accurate scan of the finger underneath.

Critically, the sensor fits inside a smartphone screen, enabling it to achieve the same space savings that would otherwise come from eliminating a home button or installing a narrow side-mounted scanner or awkward rear-mounted sensor. Qualcomm says that sensor will enable “sleek, cutting-edge form factors” and distinguish itself from alternatives by providing higher levels of security and accuracy.

While the 3D Sonic Sensor is being made available to OEMs this year, it’s expected to appear in flagship devices from an unnamed major company in 2019. Given Qualcomm’s history with Apple, it’s unlikely to be iPhones, leaving Samsung, Xiaomi, Motorola, and Google phones as likely alternatives.

We’re particularly looking forward to seeing whether Qualcomm’s scanner can outperform Apple’s Face ID, which gave up on phone and tablet fingerprint authentication in favor of depth-scanning facial recognition — a technology now found in multiple iPhone models, as well as the latest iPad Pros. There’s also a possibility that the 3D Sonic Sensor could appear in a next-generation Samsung Galaxy Watch, as Samsung has recently worked to patent in-screen fingerprint scanning smartwatches. This would bring a higher level of security to wearables than is currently offered, albeit arguably with lower convenience to users.