As the first mobile 5G cellular networks roll out over the next six months, hotspots — sometimes called “pucks” — will be the first portable consumer devices with 5G connectivity, streaming high-speed cellular data over Wi-Fi to nearby computers. And now that three of those hotspots have officially been revealed, the trend is clear: They’re going to be noticeably bigger than the latest and greatest 4G hotspots, at least during 5G’s earliest days.

Having been teased but not shown earlier in the year, HTC’s 5G Hub and Inseego’s MiFi 5G have both become official with photos and early physical samples. Previously announced by Sprint without imagery, HTC’s device was officially unveiled by Australian carrier Telstra, which showed a black-bezeled device halfway between a large smartphone and small tablet in size.

On a positive note, HTC’s 5G Hub is equipped with an atypically large screen for a personal hotspot, which the demo device used to separately measure 5G, Wi-Fi, and connected device status. Assuming this unit is functionally identical to what Sprint teased, it will go beyond traditional hotspots by including multimedia capabilities and might well use its own display to perform video content. This would enable HTC and its partners to justify the 5G Hub’s unusual size.

Inseego also revealed its MiFi 5G, which — like HTC’s hotspot — is powered by Qualcomm’s Snapdragon 855 chipset and Snapdragon X50 5G modem. Interestingly, Inseego specifically noted that the new MiFi will include Wi-Fi 6 (802.11ax) to connect to wireless clients, such as tablets and computers, enabling new devices to make optimal use of 5G bandwidth and latency.

But HTC’s and Inseego’s approaches differ substantially in form factor. Compared with the company’s latest 4G version of MiFi (above left), which is only a little larger than a standard bar of soap, the 5G model is considerably bigger. The comparison image above shows their relative volumes, assuming that their screens are the same size — 2.4 inches on the diagonal, much smaller and probably less capable than HTC’s. On the other hand, even the 5G MiFi could fit into a (large) pants pocket, while HTC’s 5G Hub probably won’t. 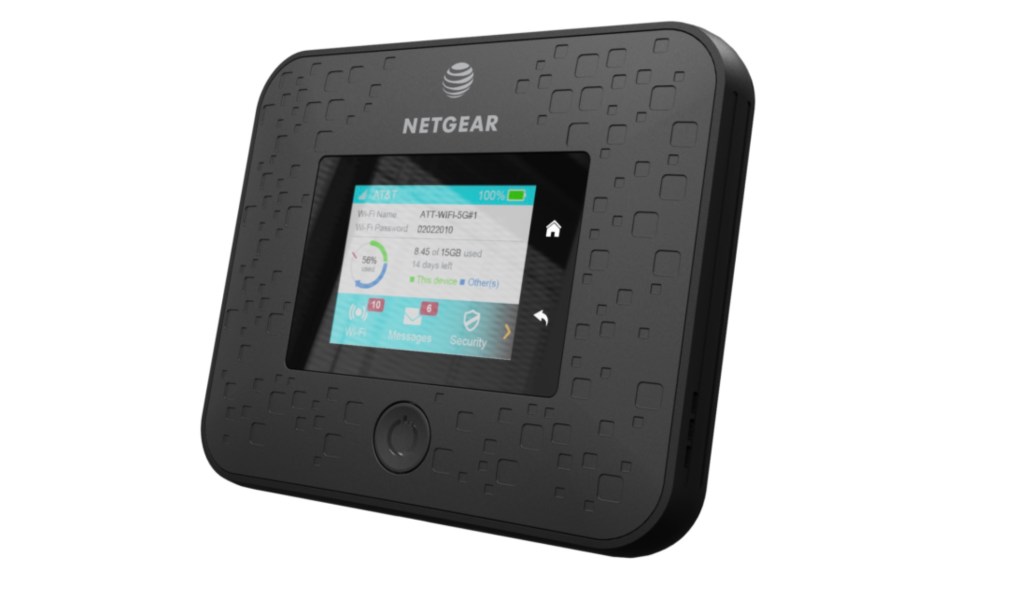 This isn’t a huge surprise, since AT&T revealed in late October that its first 5G device, Netgear’s Nighthawk 5G Mobile Hotspot, would be closer to a tablet than a “puck” in size. With only weeks left before AT&T’s latest “end of 2018” launch date for 5G, the Netgear device still doesn’t have a price tag or official release date. And the jury’s still out on whether anyone will be willing to carry around such a large hotspot to get 5G speeds in a limited number of locations.

If you’re curious why these devices are all on the large side, the answer is very straightforward: Qualcomm and its rivals are still working on miniaturizing 5G antennas and reducing the thermal output and power consumption of their 5G modems. While a lot of progress has been made in 2018, the latest innovations suggest that this is going to be a multi-step process with several size and performance improvements taking place over the first two years of 5G.

In the meantime, Inseego isn’t waiting on either 5G chip technology or 5G networks to offer faster speeds. The pocket-sized MiFi 8800L is available right now with international gigabit LTE capabilities, assuming that you’re near 4G towers with the ability to deliver that level of performance. If you’re still interested in investing in 4G devices ahead of 5G’s wide rollout, Verizon’s offering it for $200 off-contract right now. HTC’s and Inseego’s 5G hubs are expected to be released in 2019.