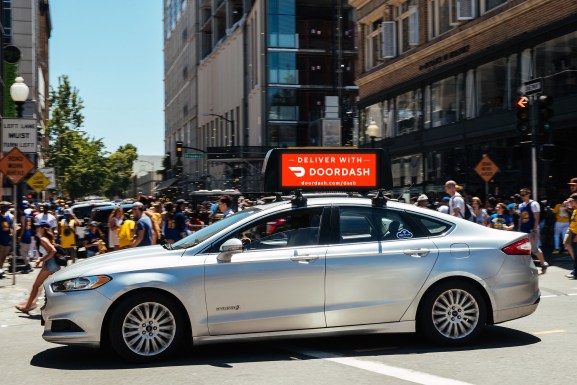 Most gig economy workers don’t make anywhere near six figures, and that’s particularly true of ride-hailing drivers. According to a TechCrunch study, Uber drivers bring in $19 per hour on average; Lyft says its U.S. contractors’ median earnings work out to $18.83 an hour nationally, and $21.08 an hour in the top 25 markets. And studies that take into account expenses such as insurance, fueling, and maintenance paint an even less rosy picture. A Buzzfeed survey found that Uber drivers in Denver, Detroit, and Houston earned less than $13.25 an hour on average, and in a recent survey disputed by Uber, MIT researchers reported that Uber and Lyft drivers’ median pretax profit was $3.37 per hour.

Those sobering numbers motivated Kaan Gunay, a Stanford graduate and longtime Habitat for Humanity volunteer, to cofound Firefly, a San Francisco startup that works directly with rideshare drivers to install advertising displays on top of their cars. It today launched out of beta after 50 ad campaigns and 110,000 hours of testing with pilot participants. The company announced that it has raised $21.5 million in seed funding led by NFX, with participation from Pelion Venture Partners, Tencent cofounder Jason Zeng’s Decent Capital, and former Shutterfly CEO and Softbank Vision Fund managing director Jeffrey Housenbold.

“Unlike many other startups, we started Firefly with a community-first mentality — we sought to have community baked into our product, ingrained in the DNA of our company, rather than tacked on as an afterthought,” Gunay said. “To do that, we’re working closely with stakeholders from all aspects of urban communities that drive value, wages and insights.”

Toward that end, they’ve already posted pretty impressive numbers. Firefly says its network gets 150 million impressions per month across 40,000 square miles of coverage, with over 650,000 hours of content played to date.

Firefly isn’t the first startup to piggyback on ridesharing platforms with a supplementary service. Cargo, an in-car commerce startup that partners with brands across confectionery, electronics, cosmetics, and more, raised $22.5 million in September for tech that lets ridehailing passengers access goods during their trip.

But Firefly’s not strictly a commercial venture. It donates a minimum of 10 percent of all inventory to promote local not-for-profit organizations, public sector announcements, and non-commercial organizations such as advocacy groups and community organizations, and an additional 10 percent of unsold screen time to non-chain small businesses like coffee shops, restaurants, and boutiques.

“With Firefly, we’re building a smart city network that works for the city, to better the lives of all of the people that live and work within it,” Gunay said.

The Coalition for Clean Air, one of the early beneficiaries, says a geofenced ad in Downtown LA, Santa Monica, and Hollywood timed to coincide with Clean Air Day received 2.9 million impressions over the course of a 4-week campaign.

“The Coalition for Clean Air was thrilled to partner with Firefly to spread a vital message promoting shared rides over solo trips for California Clean Air Day,” Brian Sheridan, director of development at the Coalition for Clean Air, said. “The platform helped us to reach strategic areas of Los Angeles to drive our message. With the benefit of Firefly’s donated ads, we were able to make our day of action an even bigger success than ever. We look forward to partnering with Firefly on even more innovative efforts in the future to ensure cleaner air for everyone.”

There’s a data-sharing element to the business, too — Firefly works with local municipal governments to provide info on city mobility, predestrian movement, and air quality.

“Firefly is unique because they’ve built a cutting edge data platform with a human-oriented approach,” James Currier, managing partner at NFX, said. “Building on a series of network effects in their technology, they have a unique opportunity to positively modernize cities and towns by connecting people, governments and businesses. They can be an important piece in building smarter, safer and more sustainable cities, driving social good at the local level.”