K-City, for the uninitiated, is one of a number of “fake cities” that have emerged as test beds for the latest smart city technologies. Google parent company Alphabet last year offered a glimpse into Castle, a key test hub for its driverless car subsidiary, Waymo. Incidentally, Waymo launched its first commercial self-driving car service in Phoenix just yesterday. And Russia opened a tech-focused “town” called Innopolis back in 2012, where Yandex recently kickstarted tests for its autonomous taxis.

Against that backdrop, the South Korean government announced K-City back in May, though it only partially opened for business last month.

At 320,000 square meters, Korea is touting K-City as the largest dedicated facility for testing self-driving cars in the world, built to replicate all manner of real-world scenarios, including bus lanes, bike lanes, highways, built-up urban areas, parking bays, and more.

Situated about an hour’s drive south of Seoul in the city of Hwaseong, K-City cost around $10 million to build. 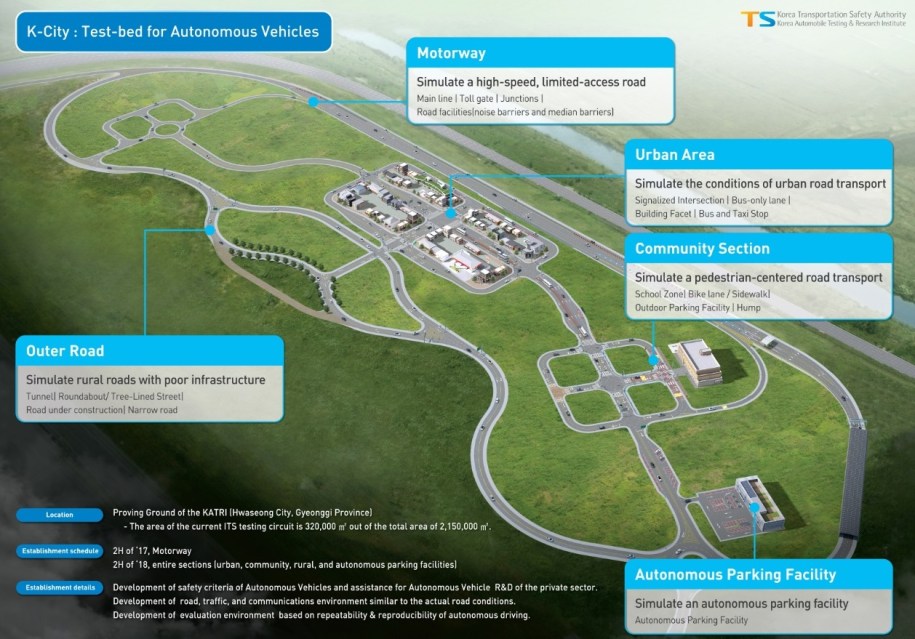 For those who haven’t followed the latest developments in 5G, the fifth generation of mobile communications, it represents much more than crazy download speeds on your smartphone — though that will be one benefit. Effectively, 5G will be the biggest enabler of artificial intelligence (AI) and many other technologies across the smart city and autonomous vehicle spectrum.

Samsung is one of the technology companies at the forefront of the 5G push, and it recently set aside $22 billion to plow into a range of transformative technologies, including 5G and AI. That Korean juggernaut Samsung has been selected to help build the infrastructure underpinning autonomous car tests at K-City should perhaps come as little surprise.

“The prominence of autonomous vehicles and connected cars is growing rapidly in the 5G era, and Samsung’s commitment to collaborative innovation in this area is stronger than ever,” said Samsung executive Jaeho Jeon in a press release.

“By building various telecommunication networks — including 5G, 4G, and V2X — in one place, K-City will provide real-world experiences of autonomous driving for people and businesses across the industry,” added KOTSA director Byung Yoon Kwon. “This open environment is expected to be served as a unique innovation lab for industry partners that will ultimately [accelerate] the availability of the autonomous driving era.”