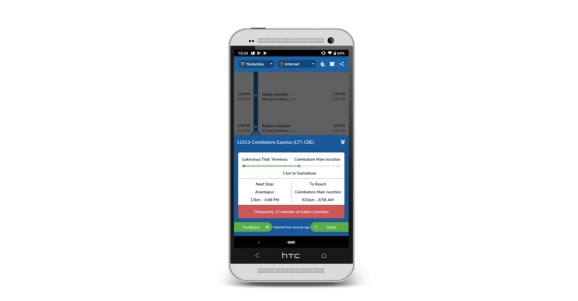 Where is my Train: Sigmoid Labs acquired by Google

Google has acquired Sigmoid Labs, the company behind popular Indian travel app “Where is my Train,” the companies announced today. Terms of the deal were not disclosed.

Acquisition of the app, which has millions of users in India, is further evidence of Google’s aggressive play for users in emerging markets.

In a statement provided to VentureBeat, Google said that Bangalore-based Sigmoid Labs will be joining the company and will continue to work on the app. “We are excited that they’re joining Google and will be part of a team that will continue to build on the current offering and more,” a spokesperson said.

As its name suggests, Where is my Train aims to help users track their trains across India. According to estimates, Indian Railways operates over 14,000 trains across the country every day and serves 30 million passengers. The app is available in eight languages.

While there are multiple apps to help people navigate their daily commutes, Where is my Train stands out because it allows users to find information without requiring access to GPS or data. Instead, the company said it relies on information sourced from cell towers. Sigmoid Labs was cofounded in 2016 by former TiVo employees Arun Kumar Nagarajan, Ahmed Nizam Mohaideen, Balasubramoniam Rajendran, Sashikumar Venkataraman, and Meenakshi Sundaram. According to their LinkedIn profiles and the Google Play Store listing, Where is My Train is the only app they have publicly launched to date.

On the Google Play Store, Where is my Train has been downloaded over 10 million times and currently ranks as No. 1 in travel and location apps, according to analytical firm AppAnnie. “We can think of no better place to help us achieve our mission, and we’re excited to join Google to help bring technology and information into more people’s hands,” Sigmoid Labs said in a statement on its website.

As growth in new users slows in developed markets, Google and other Silicon Valley companies are increasingly eyeing emerging markets like India and Indonesia. Over the years, Google has launched a range of tailored apps (such as YouTube Go) and customized its marquee services to better serve users with patchy and limited internet connectivity.

For Google, Where is My Train seems like a natural pick. Just this year, the company concluded the rollout of free Wi-Fi in 400 railway stations in India. The project, which is now part of Google Station, is currently serving 8 million train commuters in India.