According to IBM, SpectrumAI achieves the highest performance of any tested converged system — about 120GB/s of data from shared storage in a single rack. That’s thanks in part to the Armonk, New York company’s Spectrum Scale cluster file management tech, which ramps up with random read data throughput requirements to feed multiple graphics processing units (GPUs) and deliver workload performance that’s comparable to a local RAM disk. 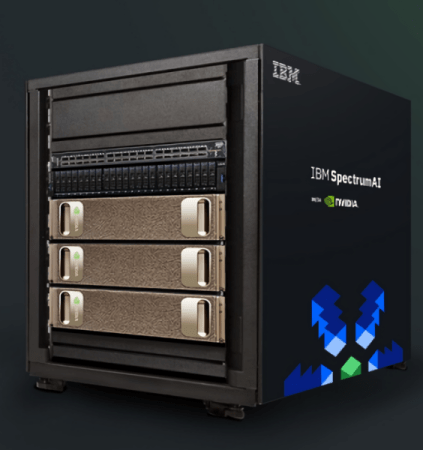 SpectrumAI can be deployed in a variety of configurations, IBM says, from a single IBM Elastic Storage Server (ESS) to several Nvidia DGX-1 servers and even a full-rack nine servers with 72 Tesla V100 Tensor Core. And it’s optimized for AI training, inference, and archiving, with testing performed by IBM and Nvidia’s reseller channel.

Mark III Systems, an AI solutions startup based in Houston, Texas, is among the early SpecturmAI adopters.

“As an IBM Platinum and Nvidia Deep Learning Partner with a full stack approach to partnering with clients around data-driven digital transformation, Mark III has seen firsthand how impactful AI can be in fundamentally transforming the user experience and discovering deeper insights from real-time and historical data than ever thought possible,” Stan Wysocki, president of Mark III Systems, said. “As AI weaves its way into enterprises and institutions, we’re excited about the possibilities around the combination of IBM SpectrumAI with Nvidia Deep Learning to help enable our customers to build, launch, and scale their AI-driven applications and services around a robust enterprise platform engineered for the future.”

There’s no shortage of data science platforms with Nvidia hardware under the hood these days. In August, data storage company NetApp debuted Ontap AI, an architecture powered by NetApp’s AFF A800 cloud-connected flash storage and DGX-1, and in September, Cisco unveiled the UCS C480 ML M5, an expansion of its Unified Computing System (UCS) server portfolio focused squarely on AI.

In fact, the cloud data center business of Nvidia that supplies GPUs for AI workloads has grown 524 percent in the last four years, and is now estimated to make up more than 20 percent of the company’s total revenue.