Microsoft’s new curatorial news app aims to cut through the deluge with the help of artificial intelligence (AI). Hummingbird, which was first spotted by Android Police, has quietly launched on Android in some countries.

It’s a straightforward affair. After signing in with a Microsoft account, you’re instructed to create a personalized feed by selecting from categories such as Entertainment, Politics, and Science and Tech, and subcategories like Celebrities, Movies, and Elections. Articles in those categories will bubble to the top of the app’s home screen, and over time start to align more closely with your reading preferences, Microsoft says.

“Hummingbird uses the latest AI and search technology to help you locate stories and videos on topics you care about and from sources you trust on the web,”  the app’s description on the Google Play Store reads. “The more you use Hummingbird, the better it gets at searching and locating stories from across the web that you’ll like — and avoiding ones you won’t,” the app description reads.

Within said feed, tapping on a story pulls up the publisher’s page, along with a menu with sharing tools and a dislike button. There’s also an option to block all news from a particular source, and to save articles for later.

Beyond the feed, Hummingbird’s got a search function for topics and viral videos, and a profile tab — aptly titled “Me” —  that yields a list of topics you’re following, articles you’ve saved, and your viewing history. The latter is also where you can disable automatic GIF and video playback. 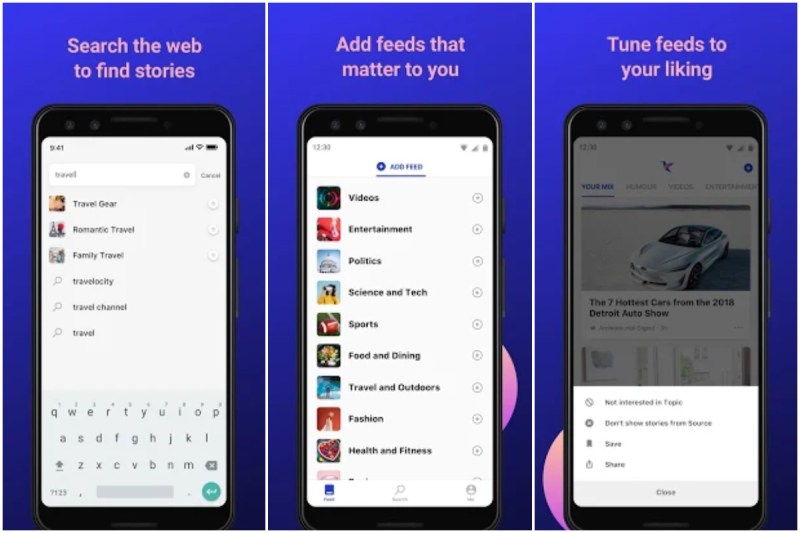 Hummingbird’s unceremonious debut comes months after Microsoft announced a redesigned News app for iOS and Android, which brought with it personalization upgrades including the ability to tailor interests to follow the news feed. Shortly after, in August, the Seattle company rolled out Bing Spotlight, an artificially intelligent news aggregator that provides an overview of developing stories in Bing search results, complete with a blow-by-blow timeline of events from “various perspectives” and relevant social media posts.

“Users’ trust in the news we present is of the utmost importance to Bing,” the Bing team wrote at the time, “and we’re committed to providing a well-rounded view of news from diverse, quality sources … Being an informed consumer of the news is more challenging today than it used to be, [and] our goal is to provide broader context for impactful stories, from politics to business to major disasters, and much more.”

Google, for its part, in May unveiled a revamped Google News app for smartphones. Like Bing Spotlight, the new and improved Google News intelligently reads articles, podcasts, videos, and social media posts, and leverages AI to fact-check and highlight items of particular note.

Beyond the category selector and downranking system, it’s unclear how Hummingbird is selecting which stories to show. Some experts believe that AI-powered ranking systems could, if not thoughtfully designed and deployed, create a negative feedback loop.

“When you click a conspiracy video on a platform like YouTube, it optimizes more clicks and advertiser views and shows you crazier and crazier conspiracy theories to keep you on the platform,” Richard Socher, chief data scientist at Salesforce, told VentureBeat in a recent interview. “And then you basically have people who become very radicalized, because anybody can put up this crazy stuff on YouTube, right? And so that is like a real issue. Those are the things we should be talking about a lot more, because they can mess up society and make the world less stable and less democratic.”

Fortunately, AI presents a possible solution, too. MIT earlier this year demonstrated a system that can detect so-called fake news and stories with political bias.