Just in time for the holidays, Google is rolling out new tools to keep your cross-country flights stress-free — or as stress-free as they can be. The Mountain View company today announced proactive flight notifications from the Google Assistant and in Google Flights, its online flight booking search service, plus more detailed fare breakdowns, search filters, and other trip-planning goodies in Google Search.

“Whether you’re coming off a holiday high or in need of relaxation after all the hustle and bustle, the beginning of the new year is a prime time to think about your next trip,” Richard Holden, vice president of product management at Google, wrote in a blog post. “With the holidays approaching, many of us will travel to see family or go on a vacation.”

The first of the new features concerns flight delay predictions, which Google rolled out earlier this year. The search giant says that — thanks to a combination of historic flight status and sophisticated machine learning — it is 85 percent confident in predicting flights that will eventually be delayed before the airlines confirm such delays. Starting this week, the Google Assistant will now show if a flight you’ve booked is expected to be delayed when you ask things like “Hey Google, is my flight on time?” You can check the status of other flights, too, specifying the airline, origin, and destination: “Hey Google, what’s the status of the American Airlines flight from Philadelphia to Denver?” 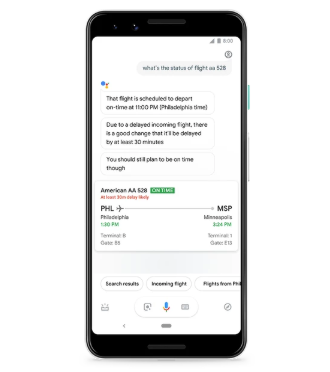 Additionally, Google says that over the next few weeks the Google Assistant will begin sending proactive notifications if Google Flights predicts a delay, along with an explanation of what caused the delay and when it might be resolved.

That’s not all that’s heading to Google Flights. Way back in January, Google began highlighting which services and amenities were not included with budget tickets across airlines like Delta, American Airlines, and United Airlines. Now, it’ll show which fares include a free carry-on bag. And when you’re searching for domestic flights in the U.S., you can filter to include checked bag fees.

Last, but not least, building on the historic flight price trend tool Google released earlier this year — alongside a top cities and activities explorer — a new trip-planning feature will show upcoming holiday and school breaks. And when you type a query like “things to do” into Google, you’ll see “popular experiences” — like sporting events or hiking — in a recently redesigned search UI with granular search filters, or on a map.